The Catholic Church’s Diocese of Brooklyn is marketing its Christmas celebrations to millennial “hipsters” with an ad campaign focusing on concepts like nightclubs and selfies. One shows a church door with the slogan “Everyone’s on the list,” in contrast to an exclusive nightclub. Another shows an attractive brunette in glasses taking a selfie with the slogan “It’s Never Just a Selfie,” and behind the woman is an image of Jesus Christ.

This marketing campaign became grist for secular-progressive mockery on Saturday on National Public Radio. The host of their game show “”Wait! Wait! Don’t Tell Me” suggested Jesus couldn’t take the selfie with the young lady because “his hands were occupied.” 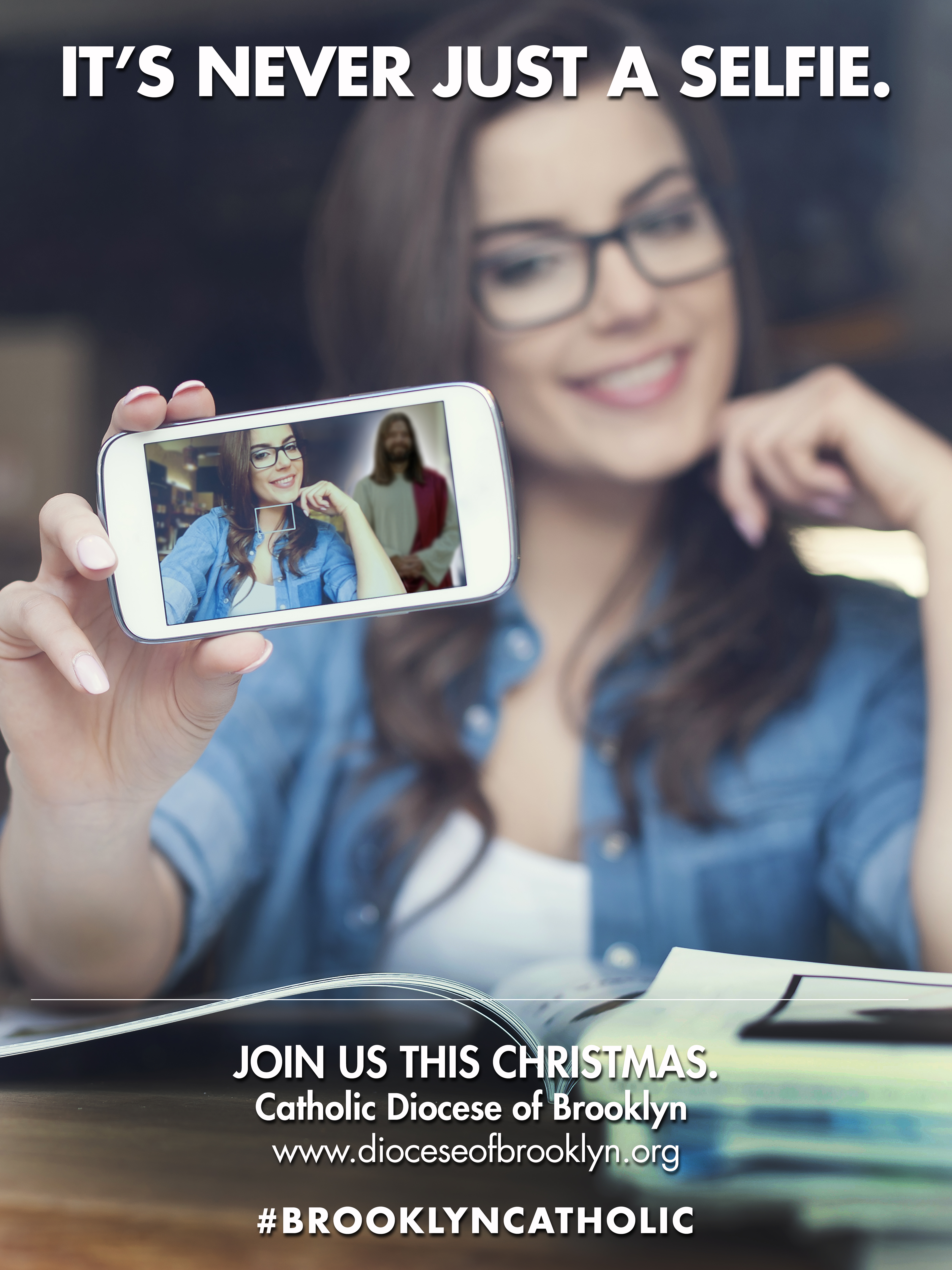 PETER SAGAL: Mo, the Catholic Diocese of Brooklyn knows it's hard to get local hipsters to go to church, right? So this Christmas they've put up ads telling people that going to church will give them a great chance to do what?

MO ROCCA: Is it -- does it have to do with the afterlife?

SAGAL: No, it has to do with the phone in their pockets and what people like to do with their phones, specifically the camera other phones....

ROCCA: When you give yourself a selfie, you turn into Jesus?

ROCCA: When you - the Holy Eucharist. It's like a transubstantiation app.

FELBER: I say we keep this going.

ROCCA: So when you go to church...

SAGAL: This is what we've established.

SAGAL: You go to church with your cell phone which has a camera on it.

ROCCA: You can take a picture of Jesus in the church.

SAGAL: Who else is in the picture?

FELBER: Bill, take away a point!

ROCCA: ...I have to tell you that last guess was a Hail Mary. (APPLAUSE)

SAGAL: You can take a selfie with Jesus. The Catholic Church preaches that Jesus is always with us, in fact he's right behind you. So this new app, Catholic Diocese of Brooklyn shows a woman sitting by herself. She's holding out her phone to take a selfie like the kids do, but in the picture you see this woman and this bearded beatific man smiling behind her. It's not some rando creepo who got into the church, it's the son of God. This raises all sorts of questions for the woman. For starters, why didn't Jesus offer just to take the picture himself? His hands were occupied.

SALIE: But it is Brooklyn, so there's bound to be some other bearded guy in a loincloth there.

Faith Salie’s jokes about the other bearded guys in loincloths suggests the more “rando creepo” interpretation of Jesus being turned on by the woman in the picture.

This should show the Catholic Church in America’s largest city trying to reach out to young people in a modern way. Monsignor Kieran Harrington, vicar for communications at the Brooklyn diocese, told FoxNews.com, “we really just wanted to be in front of people and kind of knocking at the door saying, ‘listen you are a part of community, we love you, and we want you to be with us’ and that is the whole nature of the campaign.”

He says the locals had a positive response to the ads. “A number of young people from my own parish responded really quickly when they saw the first group of ads … [saying] these are great, I’m going to show them to my friend; they very much want to come to church.”

It would be great for them if this increases church attendance in Brooklyn. But this kind of wading into today’s trends can risk slipping into the “Buddy Christ” satire of Jason Smith’s movie “Dogma.”