Washington Post “social change reporter” Sandhya Somashekhar wrote a front-page story for Wednesday’s editions on how the Barilla pasta company completely surrendered to the gay left. The headline was “A recipe for recovery: Barilla makes amends to gay groups.”

As usual, the Post divided the conflict into “gay rights groups” and “social conservatives.” Gay activist Bob Witeck described the conservative view as “stupid and backwards.” Conservatives said...nothing. There was no space for rebuttal. “Social change” moves faster when “backwards” gets censored.

In the past, companies had to be careful not to offend groups that opposed homosexuality, said Bob Witeck, a corporate crisis consultant who specializes in gay issues. Two decades ago, Witeck helped American Airlines weather criticism over its decision to market to gays. His advice at the time was for the company to explain to the opposition that this was simply a good business decision.

But more recently, opinions have shifted dramatically to the point that it is a positive for some companies to be viewed as supportive of gay rights, particularly among young customers, who might view incidents such as the one articulated a year ago by Barilla as “stupid and backwards,” he said.

In the middle of the article, we find what Guido Barilla said that was “stupid and backwards.” 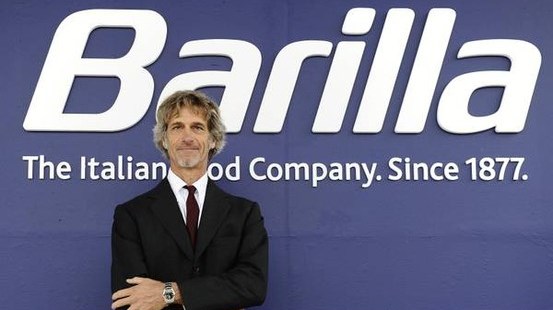 In the case of Barilla — a 130-year-old company based in Parma, Italy, that is the world’s largest pasta manufacturer — the blowback was fierce in September 2013 when Guido Barilla told an Italian radio host, “I would never do [a commercial] with a homosexual couple, not for lack of respect, but because we don’t agree with them,” according to reports. “Ours is a classic family where the woman plays a fundamental role.” He continued: “If [gays] don’t like it, they can go eat another brand.”

“He was horrified at the consequences and his personal beliefs,” according to former Clinton adviser David Mixner. The Post is merely part of the “speeding cultural change” machine, lining up leftists to announce that Barilla now passes all its political correctness tests and has shed its loathsome Bible-thumping traditionalism. It's "evolved," as in out of the Cro-Magnon era. Breathe the heady air of censorship and surrender:

He [Mixner] called the recent diversity initiative “the most all-encompassing effort to bounce back from an unfortunate misstatement that I’ve ever been part of.”

Seth Adam, a spokesman for GLAAD, a gay advocacy group that has also met with Barilla, said it is important to acknowledge someone when they have undergone an “evolution” in support of gay rights.

“I’m not giving anyone license to say things that are discriminatory,” he said. “However, I do think it’s okay to learn, and I think we’ve seen that in elected officials to everyday families.”

The company’s 100 rating in the Human Rights Campaign’s annual Corporate Equality Index, which is based on internal company policies as well as corporate citizenship, is remarkable, said Deena Fidas, director of the workplace program for the Human Rights Campaign. Last year, Barilla did not even ask to be rated. Of the 781 companies that volunteered to be rated this year, fewer than half got a perfect score.

“It is very unusual for a business to take on the full spectrum of CEI criteria in one year,” she said. “Some people may certainly speculate about the motivations here, but at the end of the day it’s irrefutable that at Barilla, you have LGBT-inclusive policies and practices . . . that were not there a year ago.” [This bold part was a pull quote in the newspaper.]

Talita Erickson, chief diversity officer for Barilla, said that the company has demonstrated its sincerity with its actions. It has expanded its health benefits to include transgender-related care. It has instituted a thorough diversity training that all 8,000 of its workers will eventually undergo. It has broadened its anti-discrimination policy to cover gay and transgender people.

The company also has donated money to the Tyler Clementi Foundation, an anti-bullying organization founded by the parents of a gay Rutgers University student who committed suicide, and featured a lesbian couple on a Web site devoted to urging families to eat more meals together.

Nobody in the story gets to say, for example, that "Human Rights Campaign" is a funny name for an anti-free speech group. "Discriminatory" speech -- soon to include sermons inside churches, if Houston is any example -- must be squashed. Nobody gets to say "discriminatory" things like "transgender-related health care" such as the amputation of breasts and genitals isn't "health care." In today's progressive Post, those things are better left unthought, not just unsaid.

Sandhya Social Change and The Post still aren’t satisfied, wanting the most complete and satisfying Honey Maid surrender. They want the gays in the ads (and apparently Web ads don’t count).

But will same-sex couples be turning up in any television commercials? Not immediately, said Erickson, who explained that the company did not want to be “reactionary” in light of the criticism.

“My understanding is we’re absolutely open to having the LGBT community represented in our ads in the future,” she said. “It’s going to happen gradually.”

Last year, Catholic.org wrote "the homosexual equivalency movement is up in arms because they cannot hijack the Barilla brand for their message." Apparently, they can,