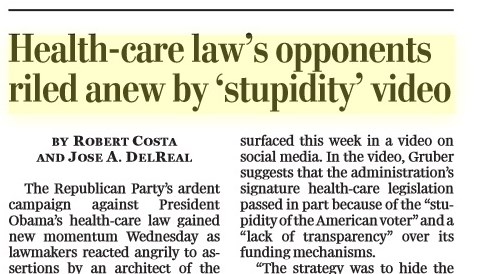 The Republican Party’s ardent campaign against President Obama’s health-care law gained new momentum Wednesday as lawmakers reacted angrily to assertions by an architect of the policy that it was crafted in a deliberately deceptive way in order to pass Congress.

On both sides of the Capitol, leading conservatives said they may call economist Jonathan Gruber to testify about his remarks, which were made last year and surfaced this week in a video on social media. In the video, Gruber suggests that the administration’s signature health-care legislation passed in part because of the “stupidity of the American voter” and a “lack of transparency” over its funding mechanisms.

The Post found “new momentum Wednesday” in the push to make Gruber testify, but it’s plain to conservatives that they’ve been dragged into this story reluctantly by the Republicans. This underlines how Republican officials need to forcefully push their ideas and initiatives into the media, and in this case they’re challenging a law reporters routinely hail as a “landmark.”

For balance, the Post turned to Team Obama for their denials that this video meant anything in the sales job they did on Obamacare:

“The Affordable Care Act was publicly debated over the course of 14 months, with dozens of Congressional hearings, and countless town halls, speeches, and debates,” White House spokeswoman Jessica Santillo said in a statement. “The tax credits in the law that help millions of middle class Americans afford coverage were no secret, and in fact were central to the legislation. Not only do we disagree with [Gruber’s] comments, they’re simply not true.”

An administration official who spoke on the condition of anonymity sought to play down Gruber’s role in developing the law, noting that he “did not work in the White House.”

In 2012, when Gruber was very useful to the Obama campaign as an architect of both Obamacare and Romneycare, he was played up, not played down.

At least the Post has decided to act like a newspaper. Still in the lame “No Documents Found” camp on Grubergate are The New York Times, USA Today, the Los Angeles Times, and even the Associated Press.

Public broadcasting is a no-show as well, with no Gruber mentions on NPR or on the PBS NewsHour, even as PBS anchor Judy Woodruff has hosted two long segments with liberal health journalists Susan Dentzer and Mary Agnes Carey on Tuesday and Wednesday nights answering the people’s "Frequently Asked Questions" about how to sign up for Obamacare.