On the eve of the midterms, Time’s Joe Klein listed “5 Things to Watch for in the Midterm Elections.” But the funniest one was number three. He titled it “Kansas Rejoins The Mainstream.”

Klein gleefully foresaw that in the defeat of Gov. Sam Brownback, “the myth of extreme supply-side economics might finally be put to rest.” But Brownback won, 50 to 46 percent. The grip of voodoo Reaganism continues: 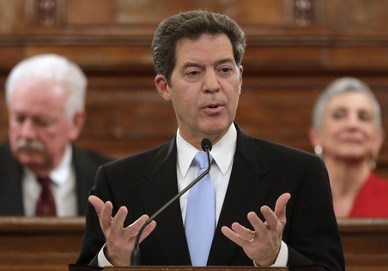 The Senate race between the aforementioned independent, Greg Orman, and Republican stalwart Pat Roberts is curious. But the plight of the current governor, Sam Brownback, may be historic. Brownback has pitched his tent atop the quicksand of voodoo economics. The results are the same as when Ronald Reagan tried massive tax cuts in 1981: they have blown a giant hole in tax revenue. Unsustainable budget cuts – in education, in everything – have resulted.

Brownback points out that the economy eventually revived under Reagan. True enough, but only after Reagan agreed to several huge tax increases and the tight-money magic of Paul Volcker’s Federal Reserve wrung inflation out of the system.Brownback’s Kansas disaster has caused the local Chamber of Commerce to rise up and support his Democratic opponent, Paul Davis, and this may have long-term consequences for Republicans.

The Chamber and other business groups have always opposed higher taxes and tighter regulations; their tacit support helped launch the Tea Party. But what if business groups, large and small, decide that fiscal responsibility is more important than tax cuts? Traditionally, business has also supported spending on education and infrastructure. The U.S. Chamber of Commerce and the high-tech community support immigration reform. What if the national business community follows the Kansas example and reshuffles its priorities? The Republican Party may well have to reshuffle its priorities too, and the myth of extreme supply-side economics might finally be put to rest.

Over at Salon.com, leftist Tom Frank, author of the book "What's The Matter With Kansas?," was keeping hope alive that left-leaning Greg Orman could defeat Republican Sen. Pat Roberts: "I am also suspicious of the heroic job-creator persona, which Orman has donned to great effect in this campaign. Despite it all, however, it is working. The outrage he has harnessed is real—real enough to elect an almost complete unknown to the United States Senate on Tuesday."

But Frank concluded with a more appropriate foreboding that socialism was going to take it on the chin on Election Day, leaving him depressed at how immoral America has become:

In fact, in what will no doubt be hailed a great Republican wave election, it is possible to discern a whole host of rotten boroughs all across America, places where the media doesn’t really care about a candidate’s proposals or the glaring contradictions in their highly moral views—where billionaire TV commercials and sheer terror carry all before them. We will elect a whole platoon of empty, defeated men to the Senate on Tuesday, and then, two years from now, we will search out another company of hollow heroes to champion our righteous rage—and do it again and again, slowly sinking into our impotent fury.