Thursday’s Washington Post was riddled with contradictions. On the front page, the Post reported “more than a half-dozen black witnesses” supported police officer Darren Wilson’s account of a fight before he shot Michael Brown.

But on the front page of the Style section, the Post championed how the leftist “human rights” group Amnesty International was citing the United States as a human-rights violator based on its police brutality. That’s unfortunate timing.

Kimberly Kindy and Sari Horwitz reported their grand-jury leaks on the front page:

Ferguson, Mo., police officer Darren Wilson and Michael Brown fought for control of the officer's gun, and Wilson fatally shot the unarmed teenager after he moved toward the officer as they faced off in the street, according to interviews, news accounts and the full report of the St. Louis County autopsy of Brown's body.

Because Wilson is white and Brown was black, the case has ignited intense debate over how police interact with African American men. But more than a half-dozen unnamed black witnesses have provided testimony to a St. Louis County grand jury that largely supports Wilson's account of events of Aug. 9, according to several people familiar with the investigation who spoke with The Washington Post.

Some of the physical evidence - including blood spatter analysis, shell casings and ballistics tests - also supports Wilson's account of the shooting, The Post's sources said, which casts Brown as an aggressor who threatened the officer's life. The sources spoke on the condition of anonymity because they are prohibited from publicly discussing the case....

Seven or eight African American eyewitnesses have provided testimony consistent with Wilson's account, but none have spoken publicly out of fear for their safety, The Post's sources said.

Here is some of what Steven Hawkins is thinking about these days: Drone strikes in Pakistan. Protests in Hong Kong. And the death of Michael Brown, the unarmed teenager who was shot by a police officer in Ferguson, Mo., this summer. 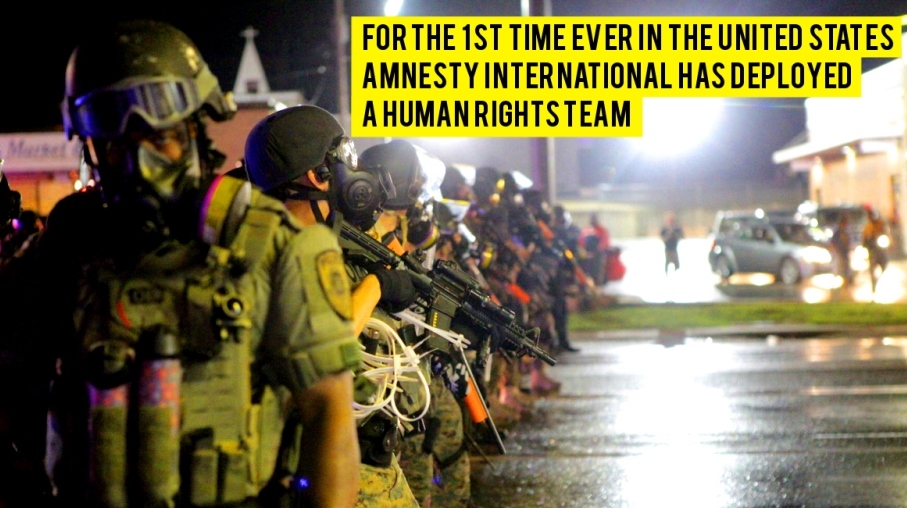 These are all, Hawkins believes, pressing human rights issues....

Amnesty has been critical of the use of lethal force in Brown's case and had no immediate reaction to reports this week that an autopsy backed up law enforcement accounts of a physical confrontation between Brown and the officer beforeBrown was shot. Hawkins and other Amnesty officials have held the view that because Brown was unarmed, he was unlikely to have presented a threat to the officer's life.

In focusing on Ferguson, Hawkins likes to say that he is "bringing human rights home. We should care equally about a child in Syria trying to get to a refugee camp and not being shot, and a child in Chicago going to school not being shot."

Thompson never identified Amnesty as a left-wing lobby, although it becomes obvious as Thompson recalled it found the Bush administration “thumbs its nose” at human rights.

Amnesty itself was not as focused on perceived abuses in the United States until about a decade ago. Following the terrorist attacks of Sept. 11, 2001, Amnesty International became more critical of the U.S. war on terrorism. In 2005, the organization released a report in which its secretary general referred to the United States as an "unrivaled political, military and economic hyper-power" that "thumbs its nose at the rule of law and human rights."

That was a key turning point. For most of its existence, Amnesty USA worked to call attention to human rights abuses abroad. But that thinking is shifting, says Jan Black, a professor at the Monterey Institute of International Studies and a member of Amnesty USA's board.

"We as a country have slipped into routine abuse of human rights on many fronts," she argues.

America, a human rights abuser...under Obama? The word “Obama” appears nowhere in the article (and Krissah Thompson is a big Obama promoter). The Post ignored Irene Khan of Amnesty insisting that “Guantanamo has become the gulag of our times.”

IT'S ALWAYS SAD when a solid, trustworthy institution loses its bearings and joins in the partisan fracas that nowadays passes for political discourse. It's particularly sad when the institution is Amnesty International, which for more than 40 years has been a tough, single-minded defender of political prisoners around the world and a scourge of left- and right-wing dictators alike. True, Amnesty continues to keep track of the world's political prisoners, as it has always done, and its reports remain a vital source of human rights information. But lately the organization has tended to save its most vitriolic condemnations not for the world's dictators but for the United States.

That vitriol reached a new level this week when, at a news conference held to mark the publication of Amnesty's annual report, the organization's secretary general, Irene Khan, called the U.S. detention facilities at Guantanamo Bay, Cuba, the "gulag of our times." In her written introduction to the report, Ms. Khan also mentioned only two countries at length: Sudan and the United States, the "unrivalled political, military and economic hyper-power," which "thumbs its nose at the rule of law and human rights."

Like Amnesty, we, too, have written extensively about U.S. prisoner abuse at Guantanamo Bay, in Afghanistan and in Iraq. We have done so not only because the phenomenon is disturbing in its own right but also because it gives undemocratic regimes around the world an excuse to justify their own use of torture and indefinite detention and because it damages the U.S. government's ability to promote human rights.

But we draw the line at the use of the word "gulag" or at the implication that the United States has somehow become the modern equivalent of Stalin's Soviet Union.