The Washington Post was shameless again in the way it tried to hide its latest Washington Post-ABC News poll that showed a trend against President Obama and in favor of the Republicans. (For their part, ABC only mentioned it for 17 seconds on Wednesday morning.)

The story was placed below the fold on page A4 on Thursday, headlined: “Voter enthusiasm points to GOP advantage, poll finds.” The story by political reporter Dan Balz and pollster Dan Clement was bad news for Democrats:

Heading into the final weeks of the midterm campaign, the political landscape continues to tilt in favor of the Republican Party, with President Obama's overall approval rating at the lowest level of his presidency and GOP voters signaling greater likelihood than Democrats that they will cast ballots, according to a new Washington Post-ABC News poll.

Americans are looking to November and beyond with dissatisfaction about the state of the country and the political leadership in Washington. Two-thirds say the country is seriously off-track. And while more than 6 in 10 say the president lacks a clear plan for governing, a slightly higher percentage says the same of Republicans in Congress. 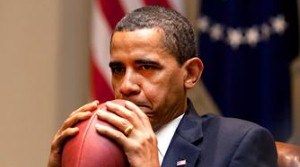 Most worrisome for Democrats is that their candidates will be weighed down by unhappiness with the president. Obama's overall approval rating stands at 40 percent, the lowest recorded in a Post-ABC News poll during his six years in office, though it is only a point lower than last month. Among independents, his rating is 33 percent.

The president's economic approval rating is better, at 44 percent, and has been moving up over the past year, coinciding with better economic news and a decline in the unemployment rate. Disapproval of his handling of the economy is at 51 percent, the best it has been since September of last year.

But public support for his handling of the threats posed by Islamic State extremists has tumbled dramatically in just the past few weeks, falling from 50 percent approval at the end of September to just 35 percent today. Three weeks ago, his rating on dealing with the Islamic State was a net positive by six points. Today it is net negative by 16 points.

On other measures, the president is at or near low points, whether international affairs, terrorism or implementation of the Affordable Care Act.

His worst rating comes on his handling of immigration, with just 29 percent saying they approve of how he has handled the issue, down nine points since June. Obama has said he will use his executive powers to make changes, including giving some kind of legal status to millions of undocumented immigrants - but not until after the elections, a decision that satisfied neither side.

Meanwhile, analysis of the survey findings shows that the Republican electorate is more motivated to vote in this election than are the Democrats. Seventy-seven percent of Republicans say they are certain to vote, compared with 63 percent of Democrats.

Someone quickly turning pages through the front section on Thursday easily could have missed it. Was it promoted with other stories at the bottom of the front page? No, it was not. Instead, readers were encouraged to read up on how “An immigration investment scandal involving former South Dakota governor Mike Rounds could prove costly to Republicans in their battle to regain control of the Senate.” That story was right at the top of A-6, headlined “S.D. green-card scandal could dash the GOP’s Senate hopes.”

The Post poll numbers were included in a front-page story -- on Ebola – but the actual poll results were in the eighth paragraph, which ended up below the fold on page A-14: “According to a new Washington Post-ABC News poll, two-thirds of Americans are worried about an Ebola epidemic in the United States, and more than 4 in 10 are ‘very’ or ‘somewhat worried’ that they or a close family member might catch the virus.”