Why No TV Titillation at the Case of the Powerful Peeping Rabbi?

All of the networks have been eager participants in holding the Catholic Church accountable for sexual abuse allegations, even dated allegations from 50 years ago. But much of the national media has chosen to ignore a powerful Washington rabbi – who has served Treasury Secretary Jack Lew and former Senator Joe Lieberman – being investigated for secretly recording women changing their clothes through a hidden camera in a clock radio. It sounds like a novel. 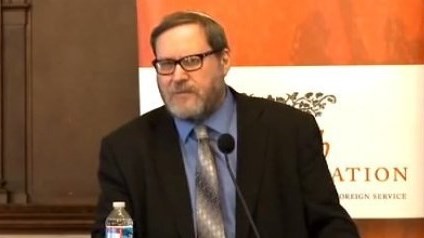 Police arrested Barry Freundel, rabbi of Kesher Israel Congregation, on Tuesday and searched both the synagogue on N Street NW and Freundel's home, a few blocks away on O Street. In two affidavits unsealed Thursday, police said the investigation is expanding beyond the six women mentioned in the criminal complaint.

"Numerous individuals have reported to law enforcement that they believe they also may have been surreptitiously recorded in the changing area to the mikvah [ritual bath]," one of the affidavits states. Police said that on one recording device, they found more than 100 deleted files dating back to February. Some of the files were labeled with women's first names.

Police said they seized a camera-equipped clock radio in Freundel's home, in addition to the one found in the shower area of the ritual bath, which is near the synagogue.

An affidavit says police now think the rabbi had been "engaging in the criminal act of voyeurism in several locations and with the use of several devices and over a period of time."

Police listed items seized from the rabbi's home as six external hard drives, seven laptop computers, five desktop computers, three regular cameras, 20 memory cards and 10 flash drives. Police have said the camera in the bath and another found in the home were part of clock-radios in which the hidden device was linked to a motion detector.

The damage of voyeurism isn’t comparable to child sexual abuse, but it still represents a violation of the trust in a religious community. One would think that this “peeping rabbi” story would be a perfect conversation starter for news shows pitched toward female viewers, But a Nexis search shows a real TV blackout.

There’s been nothing on ABC, CBS, NBC, PBS, NPR, CNN, MSNBC, or the Fox News Channel. The New  York Times had a single story. AP could only manage one 132-word brief on Wednesday:

The rabbi, 62-year-old Barry Freundel, has been charged with voyeurism. A document filed Wednesday in D.C. Superior Court says Freundel set up a recording device disguised as a digital clock radio in the changing and showering area of the National Capital Mikvah, which is affiliated with the Kesher Israel Congregation.

Police say he recorded women on June 2 and Sept. 13 and appears on tape setting up the device.

The congregation's website says Freundel, who has been the rabbi there for over 25 years, has been suspended without pay.

A telephone number for Freundel went straight to voicemail Wednesday. The mailbox was full.

Steven I. Weiss at The Daily Beast added another layer to the story, reporting “Documents obtained by The Jewish Channel several months ago and reviewed The Daily Beast reveal that Freundel was booked on a cross-country trip with a woman who was not his wife this year, which is prohibited under Orthodox laws of yichud. It’s not clear when they met or what the exact nature of their relationship was.” They underscored the rabbi’s influence within Orthodox Judaism:

Freundel’s work responsibilities until last year included setting standards for Orthodox conversion in the United States and overseeing thirteen rabbinical courts around the country, Until last year, Freundel served as the chairman of the Conversion Committee for the Rabbinical Council of America, the largest body of Orthodox rabbis in the United States. In his position, he oversaw 13 rabbinical courts and set standards for Orthodox conversion. In both positions, Freundel has been in a position to decide what activities make one eligible and ineligible to be an Orthodox Jew. Freundel is also rabbi of the prominent Kesher Israel synagogue in Washington. Not only is the congregation full of prominent Jews like Treasury Secretary Jacob Lew but it’s also one of America’s most modern, letting women read from the Torah and hold positions of leadership.

Freundel also sets standards for kosher food service in the D.C. metropolitan area as vice president of his region’s Vaad, which supervises and certifies kosher establishments.