MSNBC’s ratings in the third quarter were so dismal that New York Times TV reporter Bill Carter is allowing anonymous sources to dismiss it by saying nasty things like “you can’t discount the fact that nobody is watching the channel.”

It’s not that bad, but the ratings trend is looking grim enough to concern the liberal media. The online headline was “Leaning Forward, MSNBC Loses Ground to Rival CNN.” Carter began:

And “Ronan Farrow Daily,” the network’s heavily promoted new afternoon show, which stars a 26-year-old Rhodes Scholar with a high-profile Hollywood lineage, has been largely a dud....

MSNBC’s recent results have not been encouraging. During the third quarter, Ms. Maddow reached an average of 183,000 viewers in the audience component that most matters to MSNBC’s advertisers, viewers between the ages of 25 and 54, her lowest total since she started her show in 2008.

More worrying is the slide for “Morning Joe,” which has, for much of its time on the air, enjoyed status as one of the most talked-about shows in media industry circles. Now the heat around the show seems to have dissipated. For four straight months, and six of the last eight, “Morning Joe” has trailed CNN’s new morning entry, “New Day.”

Then came the usual weasel that trashes the subject while selfishly preserving their own career options:

One longtime news executive who has worked for both network and cable news organizations said the problem with “Morning Joe” was partly a broader issue with MSNBC. “ ‘Morning Joe’ has been hurt because no one is tuning in to watch the channel now; they go right by,” he said. “The show took its eye off the ball, but you can’t discount the fact that nobody is watching the channel.”

The executive, who asked not to be identified because of potential future business with MSNBC, said Ms. Maddow remains a draw, but her format has grown tired. “In terms of Rachel, everybody knows every night what she’s going to say,” he said. “The network just doesn’t surprise you.”

One hopes someone else trashes the New York Times anonymously with the whole tag of "asked not to be identified because of potential future business."

It's amusing (or outrageous) that the Times article on MSNBC's decline is accompanied by an MSNBC-supplied picture with the screen graphic "DEMOCRATS SURGE". 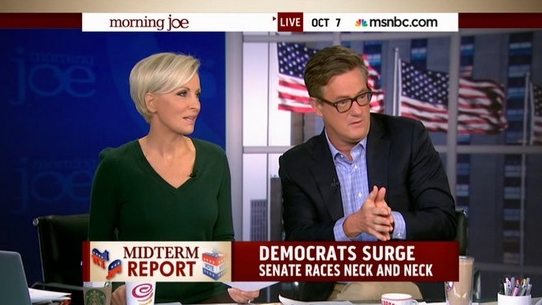 Carter noted the ratings slide is part of a long decline: "The falloff over the last five years is stark. In the first quarter of 2009, MSNBC averaged 392,000 viewers in the 25-54 demographic for its weeknight lineup. In the third quarter of this year, the number was down to 125,000."

MSNBC president Phil Griffin told Carter that a "general apathy" about American politics is hurting the network. “You can look at the dysfunction in Washington, the wariness about politics, the low approval ratings,” he said. “That’s had an impact. But we’ve got to adjust; we’ve got to evolve.”

Griffin's not acknowledging what should be obvious: that low MSNBC ratings are another sign of terrible morale on the liberal side -- like Fox News declining somewhat as Obama was inaugurated a second time in January of 2013. Liberal turnout could be as bad as the recent turnout for MSNBC viewing.

Griffin hinted that they would be going "beyond" politics, much the way CNN's going "beyond" news -- or in other words, MSNBC may have more programming like its weekend "Lockup" block.

As for MSNBC, Mr. Griffin remained optimistic despite the challenges. He defended the network’s approach, but also hinted that it had to broaden its programming beyond politics. “We have a good brand, a strong brand,” he said. “But we’ve got to get outside Washington and open up our aperture a little.”