Gwyneth Paltrow Coos at Her Backyard Fundraiser, Tells Obama 'You're So Handsome That I Can't Speak Properly'

Even Us Magazine is noticing movie star Gwyneth Paltrow oozing all over President Obama at a $32,500-a-head fundraiser in her back yard on Thursday: “overcome with nerves, the actress stumbled a little before passing the microphone off to the President, telling him flirtatiously, ‘You're so handsome that I can't speak properly.’”

That came after she declared "I am one of your biggest fans, if not the biggest," before praising him for being an "incredible role model." While Obama’s approval rating is in the dumps – in general and on specific issues – he could probably use some of that old 2008 bowing and scraping.

Caleb Howe at Red State had the longer quote from the pool report: “I’m one of your biggest fans, if not the biggest. The life that you brought to this country and the passion will historically be the most looked at and scrutinized presidencies of all time.”

Try not to laugh at the idea of our media pounding away at one of the “most scrutinized presidencies of all time.” They really believe this claptrap in Hollywood. Howe added more:

“It would be wonderful if we were able to give this man all of the power that he needs to pass the things that he needs to pass,” she fervently opined. Like Demi Moore before her, the “progressive” Paltrow wishes for nothing so much as benevolent ruler to remake the world in his image. Someone to follow and to lavish praise upon. Someone to make them feel OK about being rich and white and attractive.

This is the second fundraiser Paltrow has hosted for Obama. She hosted  Democratic supporters in her London home during Obama’s 2012 re-election campaign, but the president did not attend. He joked Thursday that there were no voters’ doors to knock on there.

Darlene Superville at Associated Press posted a picture of an adoring Paltrow on the scene:

.@GwynethPaltrow gazing at #Obama as he speaks at fundraiser at her LA home. pic.twitter.com/6gGd9rPP7y

PS: London's Daily Mail reported before the event that posters by the California-based artist Sabo mocked Paltrow as an "Obama drone." That joke clearly only deepened in the ooze that followed: 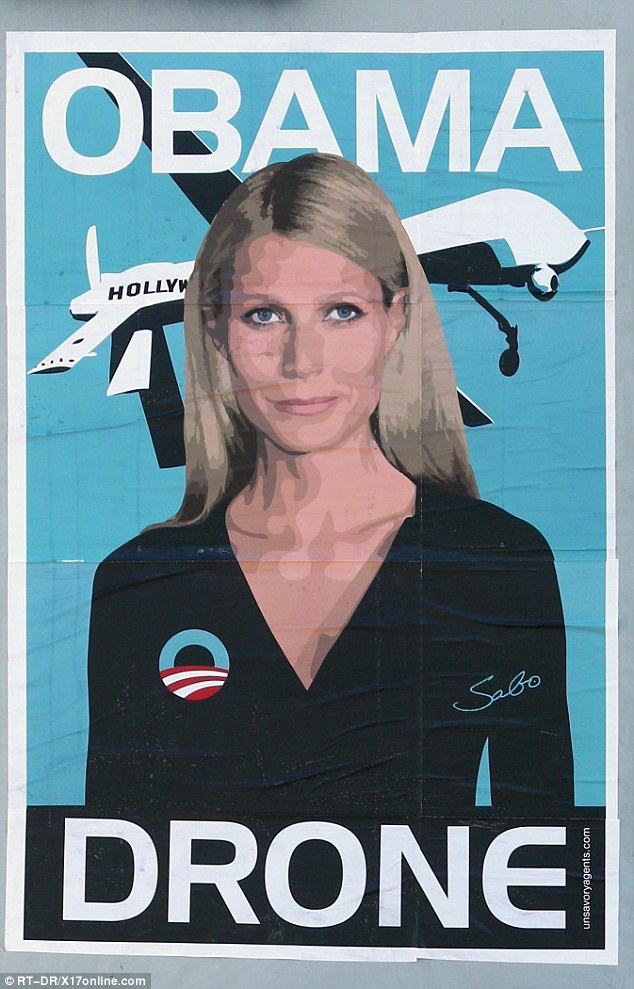