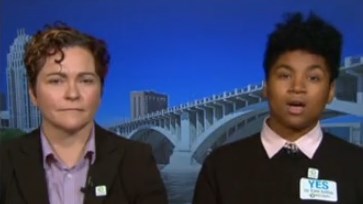 When The Washington Post makes a Minnesota story a national story, they really want to push it. Take Saturday’s front page story, headlined “Transgender athletes struggle to find their playing field.” Under the color photo, the caption explained “Zeam Porter, who is transgender, talks about feeling devastated while playing on the girls basketball team in high school.”

The sensitivity is so great that a correction (or I would call it an ideological “incorrection”) was issued: “An earlier version of this story used an incorrect pronoun in the caption for the person in the photograph, Zeam Porter. Porter's preferred pronouns [for herself] are 'they' and 'them.'"

It had been a relatively quiet policy debate until the full-page ad appeared in the local newspaper. “A male wants to shower beside your 14-year-old daughter,” it said. “Are you OK with that?”

The ad, placed by a socially conservative group in Minnesota, was meant to snap attention to a proposal to allow transgender students to play on teams based on their preferred gender rather than the sex assigned to them at birth.

More than 100 community members "flooded" a meeting of the Minnesota State High School Sports League. Somashekhar did not include the point that the local ultraliberals were furious that their liberal Minneapolis Star Tribune ran this advertisement, and cluttered social media with demands that everyone cancel their subscriptions for allowing this cruel ad to be published. As usual, liberals think a conservative view is so emotionally damaging that it should be censored, even punished as "hate speech."

The ad was placed by the placed by the Minnesota Child Protection League, which on its website lamented that in the proposed "tolerance" policy, there are no “accommodations made for those who believe that gender is a biological and genetic reality, not a social choice.”

At least 10 states and the District allow transgender athletes to play on their preferred teams, according to Trans*Athlete. New York is expected to consider such a policy this month. The one considered this week by the Minnesota State High School Sports League would have left discretion up to individual schools, with the caveat that students and their parents could appeal the school’s decision to the league.

The Post put “biological boys” in quotes to describe how “girls” with penises might have an athletic advantage and pose a sexual problem in the locker room:

The group suggested that girls could be at risk of greater injury on the field if they are playing alongside “biological boys.” And it warned that the policy could mean a transgender girl, with intact male anatomy, could shower next to other girls or bunk with them on overnight trips, putting them at risk of sexual assault.

The accusations galled advocates for gay and transgender youth, who say transgender kids are much more likely to use private stalls to change or shower rather than risk someone seeing their bodies. They say transgender girls who have been permitted to play on girls’ teams have not outstripped their teammates in ability. And they say it is unfair to characterize these children, who are often more vulnerable than their classmates, as predators.

“It absolutely misrepresents the reality of what it means to be transgender,” said Alison Yocom, a Minneapolis mother of a transgender 11-year-old boy who is undergoing hormone therapy.

“You’re not a boy showering next to a girl,” she said. “A transgender girl is a girl. There’s a difference between your parts and your gender, and I know it’s hard to understand and there is a lot of controversy around this, but to be misgendered as a boy when you are actually a trans girl is incredibly offensive.”