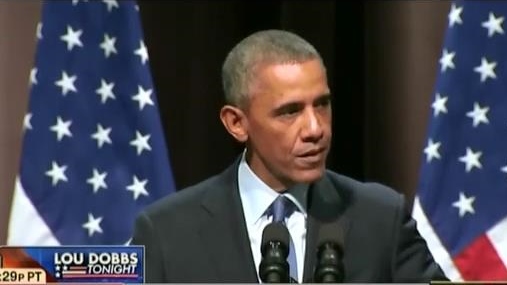 There was a good reason for Democrat-friendly networks to skip Obama’s economic speech on Thursday night. Washington Post political reporter Chris Cillizza was shocked the president seemed to hand Republicans a ready-made TV ad in the speech.

These were the words: "I am not on the ballot this fall. Michelle’s pretty happy about that.  But make no mistake: these policies are on the ballot.  Every single one of them." He then just boiled them down to the last two sentences as the advertising bonanza.

Cillizza reminded readers that of the seven seats rated "toss ups" by the non-partisan Cook Political Report, Obama lost four of them (Alaska, Arkansas, Louisiana and North Carolina) in 2012. He also lost Montana, South Dakota and West Virginia -- now viewed as lost by the Democrats. In many of these states, Obama's numbers are in a much worse place today than they were in November 2012. If Republicans only won Democratic seats where Obama lost in 2012, they would pick up 7 seats -- one more than needed to grab the majority.

He notes even in Colorado, where he won twice, his ratings are terrible: 39 percent in the last NBC-Marist poll (this explains why NBC skips over his polls and his speeches).

Cillizza guessed that Obama’s putting the screws to every Democrat in an Obama-unfriendly state to try and motivate the liberal Democratic base to turn out and vote:

It doesn't take a political mastermind to realize that an ad in which the President of the United States says "Make no mistake: These policies are on the ballot. Every single one of them" might not be helpful to the Democratic candidates trying to run away from him this November.

So, why did Obama say it? My guess is that he wanted to make the stakes clear to a Democratic base that, by virtually every polling measure I've seen, is less enthusiastic to turn out and vote on Nov. 4 than Republicans.  The idea being that if you like Obama and his policies -- which his base, especially African Americans, still do -- then you need to show it by going out and voting.  The Obama political team is working under the assumption that if you dislike President Obama, nothing he says or does is going to change that reality. So, why not show the Democratic base that this election is worth fighting for?

I think that underestimates the impact of an unpopular president (on video no less!) bluntly insisting that an election in 33 days is indeed a referendum on his policies. Republicans couldn't have written a better script than that.