What Some Consider Terrorist Propaganda: WashPost Tackles The 'Sunny Side' of Hamas Radio

The Washington Post publicized Hamas-controlled al-Aqsa Radio on Tuesday. The headline in the paper is “On Hamas radio, the news is all good.” Online, it’s “Hamas radio station in Gaza reports on the sunny side of Islamist movement’s rule.”

Post reporter Terrence McCoy starts with praise from Gaza political analyst Talal Okal. “Hamas is very good at media...People listen to them every day, and every day they speak frankly and fondly about Hamas.” Well, except, they only choose a narrative that makes Hamas looks good.

Here’s where the jokes about the pro-Obama media start to look similar:

Al-Aqsa’s strategy for covering news is simple, [Ibrahim] Daher said. “Our policy has always been to keep silent about certain news.”

“If there was bad news during the war, or something went wrong, we just kept silent about it,” he said. “And now we mostly keep silent about the blockade, and that Hamas wasn’t able to lift it during the war,” he added, referring to Israel’s partial siege of Gaza.

McCoy takes a painfully long time – 18 paragraphs – to arrive at the fundamentals, and even then the “others say” hedge comes out. Hamas is “considered” a terrorist group and Hamas radio is “what they say” is propaganda for terrorists. And I say some "consider" The Washington Post to be an fact-based news organization:

Once Hamas — an Islamist group that Israel and the United States consider a terrorist organization — seized control of Gaza, al-Aqsa took aim at Israel in a children’s television program called “Tomorrow’s Pioneers.” Critics say the show, which featured a Mickey Mouse-inspired character, was a thinly veiled attempt to incite violence against Israelis.

Such programs have given fuel to pro-Israel think tanks, such as the Middle East Media Research Institute, that scour Palestinian media for what they say is terrorism propaganda. Pro-Palestinian groups also scrutinize the Israeli media for bias.

While Israel compared Hamas to the Islamic State, al-Aqsa TV broadcast a slick music video that rollicked through several frames of rockets, masked fighters and bedraggled Israelis. “Exterminate the cockroach nest,” Hamas singers crooned in Hebrew. “Expel all the Zionists. . . . Rain upon them many rockets. Make their world into a horror.”

McCoy’s cutesy “what they say” lingo suggests he hasn’t even read other American newspapers on this channel. Steven Erlanger of The New York Times captured it more accurately in 2009: 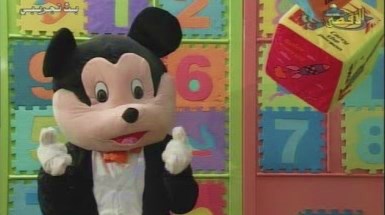 Another children's program, ''Tomorrow's Pioneers,'' has become infamous for its puppet characters -- a kind of Mickey Mouse, a bee and a rabbit -- who speak, like Assud the rabbit, of conquering the Jews to the young hostess, Saraa Barhoum, 11. ''We will liberate Al Aksa mosque from the Zionists' filth,'' Assud said recently. ''We will liberate Jaffa and Acre,'' cities now in Israel proper. ''We will liberate the whole homeland.''

The mouse, Farfour, was murdered by an Israeli interrogator and replaced by Nahoul, the bee, who died ''a martyr's death'' from lack of health care because of Gaza's closed borders. He has been supplanted by Assud, the rabbit, who vows ''to get rid of the Jews, God willing, and I will eat them up, God willing.''

When Assud first made his appearance, he said to Saraa: ''We are all martyrdom-seekers, are we not, Saraa?'' She responded: ''Of course we are. We are all ready to sacrifice ourselves for the sake of our homeland. We will sacrifice our souls and everything we own for the homeland.''