The Rush Limbaugh Show is going on the attack against leftist “Stop Rush” agitators trying to ruin his program among advertisers.

In particular, they’re challenging the idea that this is a “grassroots” movement of ordinary American consumers targeting advertisers. They say there are no average customers here, just a “small number of hardcore political activists founded by Angelo Carusone” of Media Matters for America.

The liberal group recently celebrated its tenth anniversary by noting all the conservative careers they ruined, and claiming Limbaugh lost “thousands of advertisers” by their efforts in 2012. They wanted to think the Sandra Fluke free-birth-control controversy was “Rush’s Waterloo,” which didn’t happen.

In a statement also posted on Yahoo, Team Limbaugh reports: 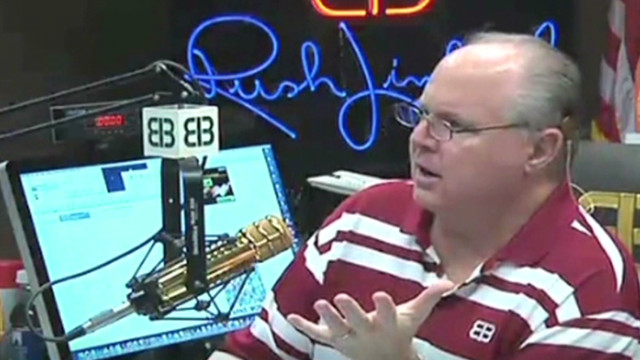 Only 10 Twitter users account for almost 70% of all StopRush tweets to advertisers, amplified by illicit software. In addition, almost every communication from a StopRush activist originates from outside the State of the advertiser. Thus, these activists are not and never would have been customers… their only role is to harass small businesses in an attempt to interfere with their operations, as long as they are advertising with Rush.

“A small number of politically motivated out-of-state activists are distributing target lists indiscriminately, and annoying small businesses until they give up the advertising deals that help them grow, or risk being unable to conduct business at all. It’s not even activism… it’s blackmail,” according to Brian Glicklich, Rush Limbaugh Show spokesperson.

How does this small group make themselves look so much bigger than they actually are? Stop Rush has deployed custom automated tweeting software, in violation of Twitter’s rules, that lets their activists send tweets at a rate far faster than any unassisted person could do manually. They send barrages of thousands of messages through this software until advertisers are bullied and harassed into cancellation.

Ever since the national Limbaugh show began in 1989, the Left has been eager to "Flush Rush" and get his show cancelled. Liberals don't really believe in free speech or a vigorous battle of ideas.

It's up to the massive national audience of conservative media consumers to insure that this latest offensive once again fails to budge Limbaugh from his beloved place in the alternative media -- the marketplace that offers the American people some way out of the obsequious Obama echo chamber calling itself the "objective media."