NPR Celebrates The New Republic And Its 'Joyous Hit Pieces' on Reagan, Will; No Mention of Stephen Glass Scandal 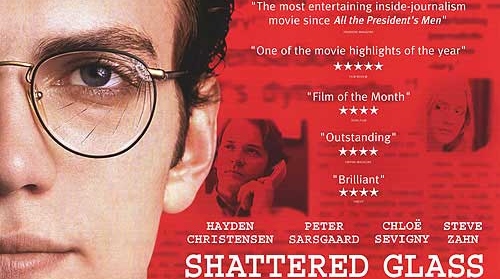 On Tuesday night’s All Things Considered, NPR anchor Robert Siegel awarded a seven-and-a-half minute interview to The New Republic and its editor, Franklin Foer. The magazine is celebrating its 100th anniversary with a new book called “Insurrections of the Mind.”

Siegel found time to ask about a Hendrik Hertzberg book review trashing Ronald Reagan as a “child monarch,” which he described as a “scathing and very amusing read.” He also brought up  a Henry Fairlie piece eviscerating George Will, which Siegel called “another very amusing piece.” But he never found time to discuss the New Republic’s enormous scandal with writer Stephen Glass's slew of wildly fabricated articles in the magazine from 1995 to 1998, memorialized in the movie "Shattered Glass.”

ROBERT SIEGEL: Let's talk about some of the articles in the anthology. Among your favorites, I gather, is Hendrik Hertzberg's essay on Ronald Reagan that was occasioned by the publication of a Reagan memoir and a biography of him. And the essay is called "The Child Monarch." It came out after Reagan had left the White House. And it is both a scathing and very amusing read.

FRANKLIN FOER: It's a comic masterpiece. Hertzberg had been the editor of the magazine in the 1980s. And he took turns editing the magazine with Michael Kinsley. And during that period of the magazine's history, there were these intense internal debates. And a lot of the intense internal debates in the 1980s revolved around the Cold War. You had Charles Krauthammer, who coined and supported the Reagan doctrine, which advocated on behalf of using proxies to battle the communists around the world. And you had a series of contributing editors who quit the magazine over its support for the Contra rebels in Nicaragua.

FRANKLIN FOER: In Central America. And Hertzberg wasn't entirely on board with this policy. And he wrote this magnificent essay that just redefines the Reagan era. And points out all the ways in which the Emperor truly had no clothes. The Child Monarch truly had no clothes. And it's just a masterpiece of comic argumentation. And he's having just an exuberant time trashing Reagan.

Hertzberg's 1991 article is hailed as a "masterpiece" when he's merely channeling all the same old liberal venom about the idiot actor who rose far above his intellect to darken the country's door with his ultraconservatism:

Though the people who served with him respected him for his occult powers — his rapport with the television audience his ability to read a text convincingly, the powerful simplicity of the core beliefs — they viewed his intellect with contempt. They thought he was a big baby, and they were right...

Below the surface — but only a little below, since these depths are not very deep — is the child monarch, a person of stunning narcissism and unreflectiveness....

The emptiness of Reagan's diary is one of many indications that the president's narcissism was of the babyish, not the Byronic, variety. And a happy baby he was.

This is classic NPR, taking conservative tax dollars and then haughtily pointing and giggling at those conservative boobs. Here’s the section about savaging George Will:

SIEGEL: Then, many decades later, there was Henry Fairlie's savaging of columnist George Will. The core of which -- another very funny essay I might add -- but the core of which seems to be you George Will say you're an Anglophile and a Tory. I, Henry Fairlie, am a real Englishman and an actual Tory, a conservative. And I call you out on both counts....I used to love reading Henry Fairlie but in reading this hit job on George Will...

SIEGEL: I have to say, I find myself saying cut the man some slack for hyperbole - when Will compares the advice columnist Miss Manners to Edmund Burke and the authors of the Federalist Papers - He's having fun with us. It's a joke.

FOER: Well, that's right. Harsh criticism is necessary. And it's wonderful. And it's a tradition that the New Republic has nurtured over the century. But some of the times, when we look back at this, we can see -- we can see the heat of the moment. We can see how rhetoric flares in some of these joyous hatchet jobs. They don't entirely bring true word for word. But you can appreciate the spirit behind it - the idea that there are these sacred cows that are worthy of slaying and that there are times when figures arise in our culture who are venerated, and nobody is willing to say, hey look, this guy is full of hot air.

The only New Republic scandal that came up (in between the Reagan and Will mocking) was 100 years old:

SIEGEL: In some essays, the New Republic took the risk of being a magazine written by and about intellectuals and broke some rules of disclosure in the process. My favorite is the essay from the first issue in November 1914. The English writer Rebecca West wrote a wonderful essay on the duty of harsh literary criticism; some of which she reserved for H.G. Wells. Tell us which she didn't disclose about H.G. Wells.

FOER: Well, Rebecca West wrote that essay at the age of 22 - which is a humbling thing to consider. And she had begun her career with a scathing essay that she wrote about the novelist H.G. Wells, in which she pronounced him one of the old maids of English literature. And this review got the attention of H.G. Wells, who befriended her and then, went a little bit further than that and had an affair with her. And two months before this piece attacking Wells appeared in the magazine, she bore Wells a child. So the duty of harsh criticism is especially pointed when it comes to our ex-lovers.

SIEGEL: It exceeded the duty of disclosure, of conflict of interest, for sure in that case.

This is how it started:

SIEGEL:  In your introduction, you give a brief history of the magazine. And you write that the New Republic, when it began a hundred years ago, would help craft a new notion of American government; it's called liberalism. How central has the New Republic been to American liberalism?

FOER: Well, for starters it invented the name as we know it now. Before the 19-teens, liberalism meant laissez-faire. It meant freedom from the strictures of government and authority. It meant free markets. And that all changed in the 19-teens and the pages of the New Republic; where liberalism came to mean affirmative government, a stronger state, all the ways in which we now can note the term.