ABC to Stephanopoulos: Is Class Warfare a 'Winning Strategy' for Hillary?

Talk about a softball. On Sunday's Good Morning America, co-host Dan Harris asked George Stephanopoulos, a former Bill Clinton operative, if class warfare was a "winning strategy" for Hillary Clinton. Unsurprisingly, the man who secretly donated $75,000 to the Clinton Foundation answered in the affirmative. Regarding Saturday's campaign launch, Harris mused, "Hillary Clinton has not wanted to be seen as a class warrior. But in this speech, she really went for it... Is this a winning strategy for her?"

Agreeing that it was, Stephanopoulos lectured, "Hillary Clinton knows if she's going to get the nomination... she has to hold on to that populist energy, the populist base of the Democratic Party."

In a segment a few minutes earlier, Harris talked to Cecilia Vega, ABC's official Clinton correspondent. She enthused, "One of America's most well-known politicians, now trying to reintroduce her again to voters." Nowhere in her segment did mention any of Clinton's numerous scandals.

Vega has quickly developed a history of fawning over the Democratic presidential candidate.  On April 14, she acted as a stenographer, sentences started this way: "We're told..." "A campaign aide revealing..." "Her campaign says..." Later that day, Vega insisted that Clinton is working to win voters "one handshake, one chai at a time." (This was a reference to Clinton's visit to an Iowa coffee shop.

A transcript of the June 14 Stephanopoulos segment is below: 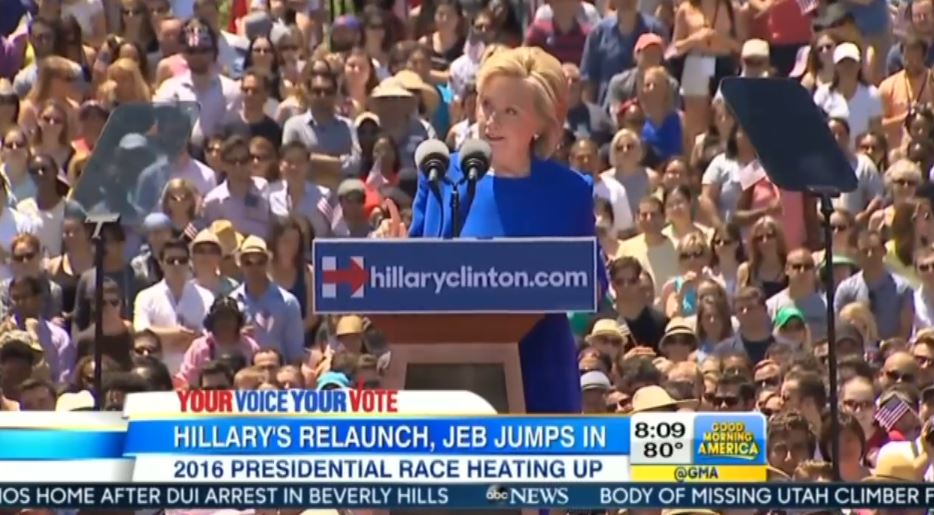 DAN HARRIS: For more on this, let's bring in ABC News chief anchor George Stephanopoulos, who will be hosting This Week later this morning.

HARRIS: George, good morning. In the past, Hillary Clinton has not wanted to be seen as a class warrior. But in this speech, she really went for it. She criticized income inequality in this country. Criticized hedge fund managers. And on the cover of the New York Post this morning, they've got a headline, "Rodham Hood." Is this a winning strategy for her? 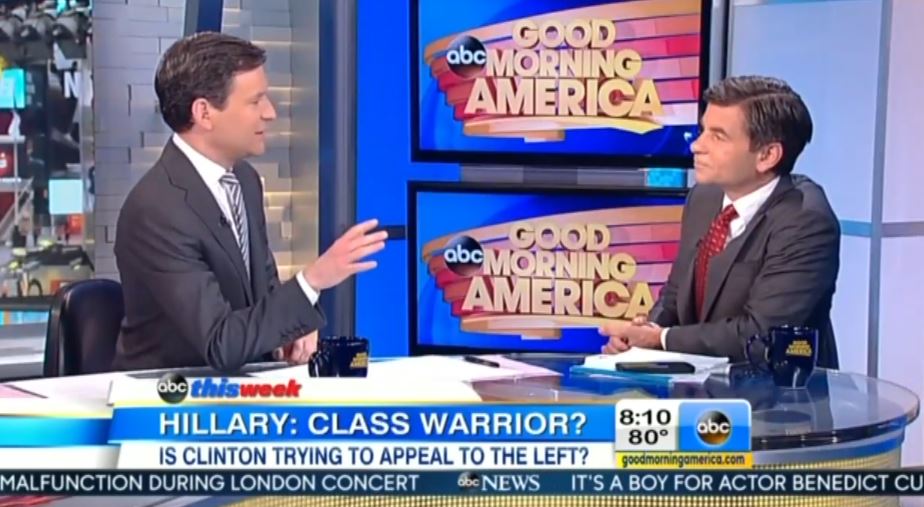 STEPHANOPOULOS: There's a lot of populist energy in that speech. And I think if you look at our latest ABC News Washington Post poll shows why she's doing it. Strong majority of Americans believe inequality is a real problem and something has to be done about it. And there's special energy on the Democratic side. Cecilia showed Bernie Sanders putting up a strong challenge. Martin O'Malley also emphasizing these issues as well. Hillary Clinton knows if she's going to get the nomination, she has a big lead right now, she has to hold on to that populist energy, the populist base of the Democratic Party.

HARRIS: Not a few people have pointed out, however, that she's in a tricky position, criticizing the rich while she's rich herself.

STEPHANOPOULOS: Definitely part of the one percent.

HARRIS: Yes, a fine line to walk right there. George, thank you.