That Was Quick: George Stephanopoulos Back on Hillary Stories

Journalists on all three networks, Wednesday, covered Hillary Clinton talking to reporters for the first time in a month. Yet, ABC's Good Morning America managed to do the story without any Republican critics and with George Stephanopoulos returning to anchor the segment. GMA correspondent Cecilia Vega underlined, "Twenty eight days. That's how long Hillary Clinton went without taking questions from reporters and, believe me, we have been asking."

At the actual news conference, Vega pressed the candidate: "You're in the tip-top echelon of earners in this country. How do you expect everyday Americans to relate to you?" Stephanopoulos, who has been under a firestorm of criticism for secretly donating $75,000 to the Clinton Foundation, introduced the story. On Tuesday, the co-host was noticeably absent from the Clinton segment and Robin Roberts substituted.

On Wednesday, Stephanopoulos wondered, "No sense Clinton will be taking questions more regularly from the press?" Vega replied "probably not" and instructed viewers not to expect "these big press conferences like we saw yesterday." To reiterate, Tuesday's interaction with the media lasted less than five minutes. Hardly "big."

Over on NBC's Today, Andrea Mitchell asserted, "Republicans have been demanding answers on a host of subjects." Unlike ABC, her segment included GOP complaints: 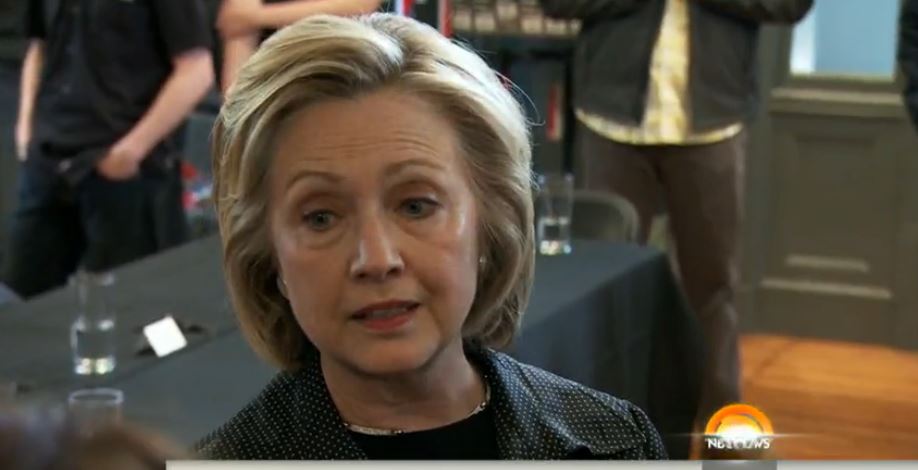 ANDREA MITCHELL: Republicans have been demanding answers on a host of subjects.

RAND PAUL: Someone needs to ask Hillary Clinton, was it a good idea to topple Gaddafi in Libya?

CHRIS CHRISTIE: Nobody would take from a Republican that they had a private server, that they deleted the e-mails on it. But take my word for it.

On CBS This Morning, Nancy Cordes managed one clip of Republican attacks:

SCOTT WALKER: Basic ethics 101 will tell you that it's a conflict of interest to take money, to have your spouse take money from foreign governments at a time someone's Secretary of State.

Cordes noted Clinton took "five questions" and that this was the first press conference "in nearly a month." Clearly, there was a slightly irritated tone among the journalists at the three networks. If the Democratic candidate keeps snubbing the press, the question is will it continue?

A transcript of the May 20 GMA segment is below:

GEORGE STEPHANOPOULOS: We're going to get to the race for president now and Hillary Clinton taking questions from the media for the first time in weeks. With the pressure building, she faced reporters on subjects from the Iraq war to her personal wealth. And our Clinton correspondent Cecilia Vega is on the trail with the Democratic front-runner in Des Moines. Good morning, Cecilia.

HILLARY CLINTON: Okay, are you all ready?

VEGA: From her vote as a senator for the war in Iraq –

CLINTON: I've made it very clear that I made a mistake, plain and simple.

VEGA: – to Emailgate.  A judge ruling, Tuesday, that those work e-mails written on her personal account will be released in batches every two months.

CLINTON: I have said repeatedly, I want those e-mails out. Nobody has a bigger interest in getting them released than I do.

VEGA: Even her income. The presidential candidate promising to champion the middle class as Bill and Hillary Clinton raked in more than $25 million giving speeches around the world.

VEGA: You're in the tip-top echelon of earners in this country. How do you expect everyday Americans to relate to you?

CLINTON: Well, obviously, Bill and I have been blessed. But we've never forgotten where we come from. Most Americans understand that the deck is stacked for those at the top and I am running a campaign that is very clearly stating, we want to reshuffle that deck.
VEGA: A 28-day-long silence ended with six questions.

VEGA: Yeah, she didn't answer all of those questions. So, is this the new Hillary Clinton on the campaign trail? Probably not. Her campaign tells us, her focus is still, George, on the voters. Not the candidate.

STEPHANOPOULOS: So, no sense Clinton will be taking questions more regularly from the press?

VEGA: Well, probably not. Her campaign is still calling this that ramp up and until that's over, we probably won't be seeing these big press conferences like we saw yesterday.