Climate change enthusiast Bill Nye appeared on MSNBC, Monday, to lobby the network for more global warming cheerleading and the importance of linking all weather events to the phenomena. Talking to Joy Reid about the cold and snow hitting much of the country, he implored, "...Just say the word climate change. Just, like, 'It could be climate change. It's a possible connection to climate change. Is this evidence of climate change?'"

Nye demanded, "Could you just toss that in now and then?" A compliant Reid agreed: "Absolutely. I would like to toss that in every single time." Nye then stated the obvious: "MSNBC is, in many ways, regarded as a progressive station." He spoke to the few conservatives watching MSNBC: "We need you."

Nye quickly turned insulting, "But if the conservative side are going to continue to deny what 97 percent of the scientists in the world are saying, we're not going to reach a consensus. We are not going to make progress."

Before fist bumping Reid goodbye, Nye reiterated the need to make every other word "climate change":

BILL NYE: Just talk about it...If we were talking about it, we'd raise awareness and get to work and I, as a guy born in the U.S, would like the U.S. to be leading this effort. It's President's Day.

The genesis of the segment on Monday was a Time magazine article slamming Pat Sajak for dismissing the winter storms as "weather." The Time headline dismissed, "Wheel of Fortune Host Tweets About Climate Change Again." (Of course, climate change activists are not often derided as mere celebrities. James Cameron has been a frequent guest on the network. He's not derided as the "Titanic director.")

On January 26, Nye connected the storms in Boston on climate change and sneered, "I know there will be certain viewers who will become unglued."

A transcript of the February 16 Reid Report segment is below: 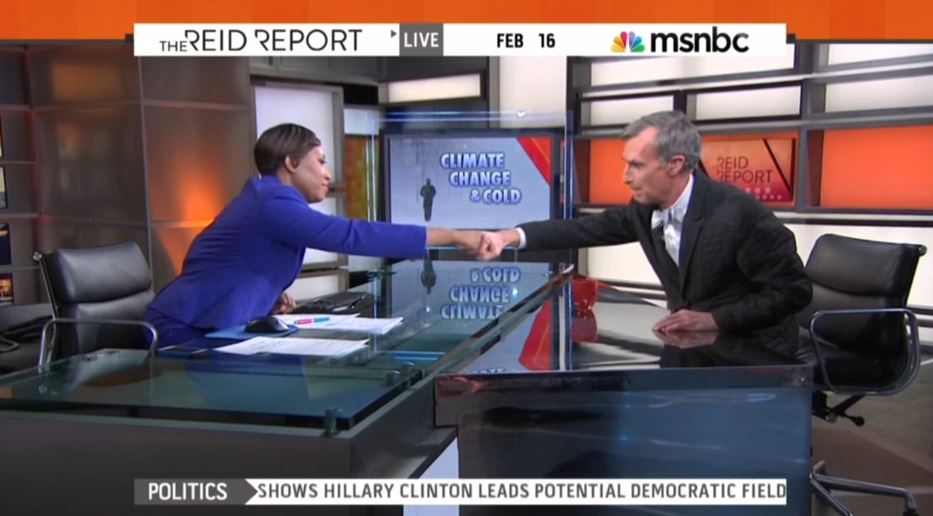 JOY REID: Why should we care that it is cold in the winter? Well, for one thing the unusual nature of some of these temperatures does raise, or should raise, questions about climate change. And joining me here on set is Bill Nye the Science Guy, one of my favorite people, period. But favorite people to talk about this. So, Bill, there's a helpful description from someone named Eliana Dockterman in Time magazine that sort of teases the difference between climate change and weather. She says, "Cold snaps do not change the overall trajectory of our warming planet. While weather is what changes in the atmosphere day to day, climate is how the atmosphere behaves over a long period of time." So, when it's cold, should we then say, "Oh, no problem. Don't worry about climate change."

JOY REID: Absolutely. I would like to toss that in every single time. Because I'm of the mind, Bill Nye the Science Guy, that, you know, I grew up in Denver, Colorado. I went to school in Cambridge, Massachusetts. I have lived in New York. I've lived in places where it's cold all the time.

REID: But when you see extremes of cold, when you're breaking, I'm counting one, two, three, four, five records from Little Rock to Flint, Michigan, to Redding, Pennsylvania, New Jersey.

REID: We're breaking 100-year-old records in cold. Is there not enough attention that people are paying to what we are doing to the planet and how it's impacting our daily lives?

NYE: No, there isn't enough attention being paid. But I'll go on to say if the ocean, this mythic thing, the noreaster, if the oceans just ever so slightly warmer, it snows more. There's more moisture in the atmosphere, just for example. Yesterday, everyone was so excited about thunder snow, this is where you had atmospheric conditions. So, the gradient, the difference between the bottom of the top of the atmosphere was so strong that it was lightning and thunder during a snowstorm. Oooh. It's cool. It's cold. The other thing I would say, MSNBC is, in many ways, regarded as a progressive station, as opposed to a conservative – I say station -- news organization. I will say to the conservatives, we need you. This is to say, we can't have everybody be a progressive, liberal bleeding heart and so on and so on. We need people on both sides. But if the conservative side are going to continue to deny what 97 percent of the scientists in the world are saying, we're not going to reach a consensus. We are not going to make progress.

NYE: And I get a sense that if I can use the term "they" know this because they say repeatedly "Well, I'm not a scientist so therefor I can't have an opinion on this." But you're a human running around in Boston or Louisville and you can look at the graphs as much as anybody. The world's climate is changing.

NYE: And along with that, apparently, is this extraordinary winter event. See, I have got to tell you the hot weather events like we had in Texas in 2012, those are now statistically connected to climate change. You know, any one event is hard to do when you're talking about --

REID: It's the cumulative effect.

NYE: Yeah, yeah. I bet you in coming years, people will be able to tie events like this mathematically to the bigger picture. So, we need you, you guys Just say it could be climate change, possible connection. Just once in awhile.

REID: Yeah. And I think the bigger picture meaning we're not pursuing aggressively the policies that could do something about it.

NYE: Can I throw in one more thing?

NYE: If we were talking about it, we'd raise awareness and get to work and I, as a guy born in the U.S, would like the U.S. to be leading this effort. It's President's day. Let's go. Let's lead.