Todd followed up by mentioning another social issue: "If the Supreme Court on a Friday rules that -- basically overturns Roe v. Wade, makes abortion illegal in this country, would you say -- would you support that or do you think it has to go through the same process you just described?" This liberal talking point is wrong.

As explained by Factcheck.org, the simple answer is this:

The Roe v. Wade decision in 1973 made abortion legal nationwide, but overturning Roe would not mean a nationwide ban on the practice. Rather, it would give jurisdiction back to the states, each of which would be able to decide whether or not to allow abortion within its borders.

Chuck Todd should know that.

A transcript of the January 25 exchange is below: 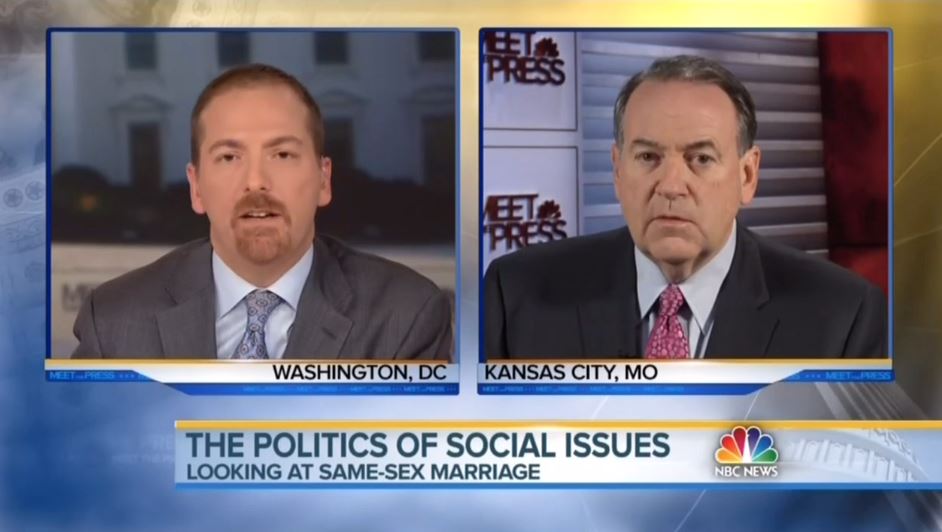 MIKE HUCKABEE: This idea that a judge makes a ruling on Friday afternoon and Saturday morning same-sex marriage licenses are being given out, that`s utter nonsense.

HUGH HEWITT: Would you counsel civil disobedience to county clerks?

HUCKABEE: The point is states would be in a position that their legislatures would have to go into session. They would have to create legislation that the governor would sign. If they don`t, then there is not same-sex marriage in that state.

TODD: I just want to clarify. Are you advocating essentially nullification here by the states if the Supreme Court legalizes same-sex marriage?

HUCKABEE: No. I'm advocating an adherence to the constitution. I'm really saying that there is a process to change the law. And it doesn't just involve one unilateral branch of government. Gosh, Chuck, when I was governor, I wish unilaterally I could have done some things as governor. With 90 percent Democrats in the legislature it would have been much easier sledding for me if I could have just acted. I'm sure the courts would like to act all by themselves. I guarantee the legislature would like to act by themselves. That's why the founders created this very cumbersome, tedious, sometimes disgustingly slow process of changing the law. The courts can't make a law. They can interpret one, they can invalidate one. But even then, as in the case of the Dredd Scott decision in 1857 that said black people weren't human beings, Abraham Lincoln refused to adhere to that because he said it wasn't a just law.

TODD: But if the Supreme Court on a Friday --

TODD: If the Supreme Court on a Friday rules that -- basically overturns Row v. Wade, makes abortion illegal in this country, would you say -- would you support that or do you think it has to go through the same process you just described?

HUCKABEE: Well, what I was describing to Hugh Hewitt by the way on the Friday afternoon/Saturday morning issue, was a circuit court judge in Arkansas, who late on the Friday afternoon, too late for anyone to file a stay or an appeal, issued a ruling. And the next morning county courthouses that were normally closed opened up to issue same-sex marriage licenses.
And that's what I was saying. You can't just do that. It would be like when the Supreme Court in my state issued an education funding ruling. We didn't start sending out checks the next day, until the legislature met, changed the funding formula, made it constitutional, and I enforced it through the state's Department of Education. We have a process. We swear to uphold the Constitution. By gosh, I'm convinced a lot of people don't even know what the constitution says when it comes to making law. But judges can't make law. That's judicial supremacy and that is not constitutional.