A day after Islamic terrorists murdered 12 people for the offense of printing satirical cartoons about Muhammad, USA Today printed an "opposing view" op-ed from a radical London cleric. Given the opportunity to freely express his opinion, Anjem Choudary lectured American readers, "Therefore, Muslims do not believe in the concept of freedom of expression, as their speech and actions are determined by divine revelation and not based on people's desires."

A sub-headline for the article wondered, "Why did France allow the tabloid to provoke Muslims?" Choudary justified the attack: "Muslims consider the honor of the Prophet Muhammad to be dearer to them than that of their parents or even themselves. To defend it is considered to be an obligation upon them. The strict punishment if found guilty of this crime under sharia (Islamic law) is capital punishment implementable by an Islamic State. This is because the Messenger Muhammad said, "Whoever insults a Prophet kill him."

He casually added, "However, because the honor of the Prophet is something which all Muslims want to defend, many will take the law into their own hands, as we often see." Blaming the victim, Choudary concluded:

So why in this case did the French government allow the magazine Charlie Hebdo to continue to provoke Muslims, thereby placing the sanctity of its citizens at risk?

In an opposing view next to Choudary, USA Today's editors stood up for free speech:

The satirists might be unlikely heroes, but they are heroes nevertheless — martyrs to that most fundamental of Western values, the right to free expression, which they chose to exercise despite threats and a firebombing just three years ago that might have muted others. 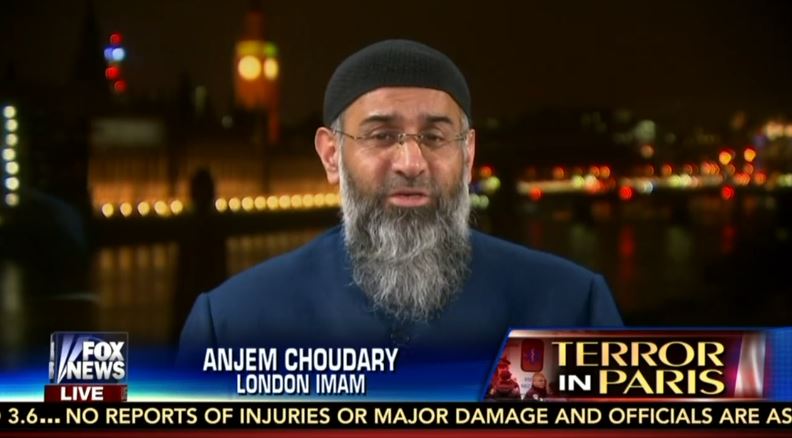 ANJEM CHOUDARY: Actually, as a Muslim we believe sovereignty and supremacy belongs to god and therefore we believe in submitting to the commands of god. We don't believe in freedom of expression.

CHOUDARY: What we say is that freedom of expression has a responsibility by those people who espouse it in the west, in particular non-Muslims. But as you know it is, you know, changed, you have laws which allow, you know, the containment of human expression for your own national security.

HANNITY: I get what you're saying. You're saying anything offensive about the prophet Muhammad should be illegal and you believe that should be worldwide. Every country should adopt that law.

On Twitter, Choudary flatly declared, "Freedom of expression does not extend to insulting the Prophets of Allah, whatever your views on the events in Paris today! #ParisShooting"

"Whatever your views" on the murder of 12 people?