MSNBC Panelist: 'Foundation of This Country Is Racism'

According to MSNBC panelist Mychal Denzel Smith, the problem with the Ferguson decision is that people are not dealing with the inherent "racism" and "white supremacy" of America. The Nation magazine blogger appeared on The Reid Report to praise the protests as a way to make "the people in these privileged and powerful positions uncomfortable with all of the death that we are facing, the terrorization that we are facing as a community."

Using the Michael Brown case as a way to condemn all of America, he excoriated, "What we refuse to deal with it is the idea -- the fact -- that our, the foundation of this country is racism and white supremacy and all of our institutions uphold that." [MP3 audio here.]

Rather than dispute the contention that America is built on "racism," Reid responded by muttering, "Depressing." She insisted that it was hopeful Smith was "trying to keep people's spirits going."

A partial transcript of the November 25 segment is below: 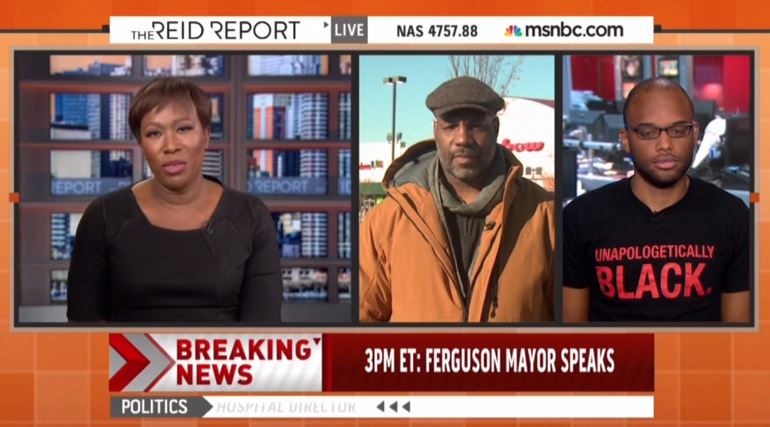 JOY REID: I want to bring in Jelani Cobb the, director of African-American studies department at the University of Connecticut and Michael Denzel Smith, a blogger at the Nation. Thanks to both of you for being here.

REID: And Michael, you know, down to the shirt you're wearing that says unapologetically black. I mean, one of the things that I love about your writing is that you do try to kind of assert and salvage a sense of black male personhood despite everything from the Trayvon Martin case to this. How do you continue to do that and salvage that sense of citizenship in a situation like this? 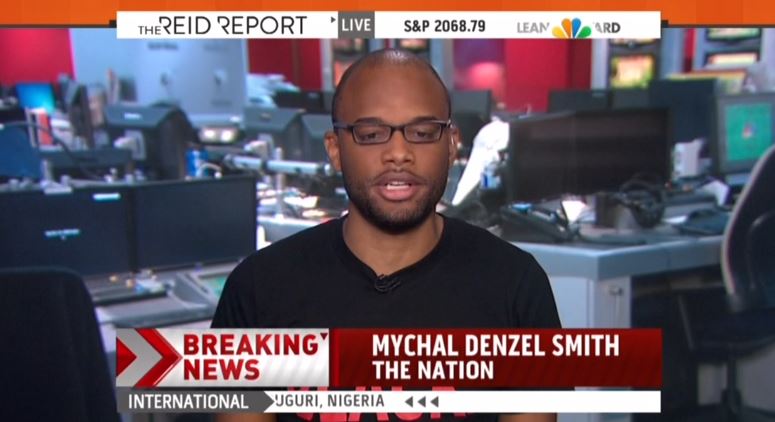 MYCHAEL DENZEL SMITH (The Nation):  Well, I do it because I have no other choice. My survival depends on it. Our survival depends on it. We are constantly asserting ourselves and we are finding ourselves constantly back in this situation. And I think that the point is to reach the people that are not hearing us, to make them really uncomfortable with this -- with the situation and make it untenable for them as well. And I think that that's the point of all of the demonstrations. That's the point of the protests and the organizing that's happening on the ground, is to make people -- the people in these privileged and powerful positions uncomfortable with all of the death that we are facing, the terrorization that we are facing as a community so that they understand and feel where we're coming from so they're moved to action in the same way we have been.

REID: We were supposed to have this conversation and deal with it on a national level in the Trayvon Martin instance and clearly we have not. What does it mean for this country that we really have not dealt with it?

SMITH:  Well, we have this conversation over and over again. The problem is, one, people come to the conversation with a sort of amnesia and forget that we had it before, also the parameters of the conversation are so narrowly defined as to define racism as a personal hatred towards black people. And we're not then dealing with the systematic ideas that uphold racism and white supremacy in this country and then lead to a death of Trayvon Martin or a Michael Brown or a Renisha McBride or Rekia Boyd. Or on and on and on. What we haven't dealt -- what we refuse to deal with it is the idea -- the fact -- that our, the foundation of this country is racism and white supremacy and all of our institutions uphold that.