Now that even the networks have grudgingly covered Jonathan Gruber's repeated attacks on the "stupidity" of American voters, MSNBC on Monday touted the President's efforts to distance himself. An MSNBC graphic hyped, "Obama Slams Gruber: Defending ObamaCare" and NewsNation host Tamron Hall insisted the President is "is firing back against" the accusations.

Hall assisted the Obama damage control effort, quoting, "Former adviser David Axelrod put it this way, tweeting, quote, 'As one who worked hard to make ACA and its benefits clear: Let me say, if you looked up stupid in the dictionary, you would find Gruber's picture.'" She cheered, " Former, current White House people are not holding back the punches as it relates to Gruber." [MP3 audio here.]

MSNBC included two clips of the President attacking Gruber, including dismissing him as someone "who never worked on our staff." (The fact that the ObamaCare architect was paid $400,000 by the administration did not come up during the segment.) 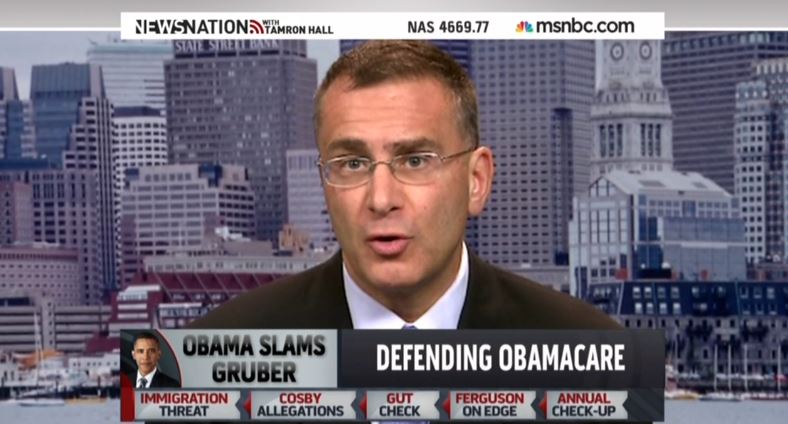 Last week, as part of the damage control effort, Gruber appeared on Ronan Farrow's MSNBC show to renounce his own attack on the American public. He conceded, "I was speaking off the cuff and I basically spoke inappropriately and I regret having made those comments."

Hall and colleague Chris Jansing on Monday did not note that Gruber didn't just trash the American voters just once. Five separate incidents have surfaced. Hardly "off the cuff."

A transcript of the November 17 segment is below: 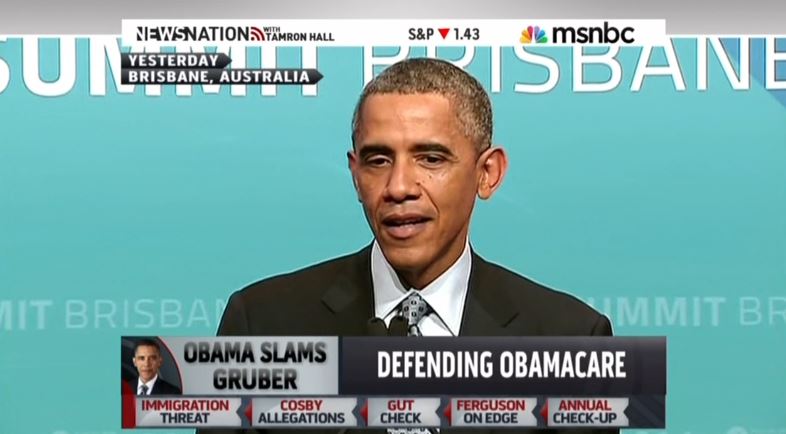 TAMRON HALL: Turning to Washington, D.C., and politics here. For the first time, President Obama is firing back against the accusation by one of the health care law's top advisors that a lack of transparency and, quote, "stupidity" on the part of voters allowed the law's passage.  MIT  economist Jonathan Gruber made the comment a year ago, but they just surfaced online. Well, during a news conference yesterday in Brisbane yesterday at the G-20 summit, President Obama denied his administration intentionally misled the American public.

BARACK OBAMA: The fact that some adviser who never worked on our staff expressed an opinion that I completely disagree with, in terms of the voters, is no reflection on the actual process that was run. I think it's fair to say there was not a provision in the health care law that was not extensively debated and was fully transparent.

HALL: And former adviser David Axelrod put it this way, tweeting, quote, "as one who worked hard to make ACA and its benefits clear: Let me say, if you looked up stupid in the dictionary, you would find Gruber's picture." NBC's senior White House correspondent Chris Jansing joins me now. Former, current White House people are not holding back the punches as it relates to Gruber, Chris, as you well know.

CHRIS JANSING: Yeah. Neither is the President, Tamron. Because they've made it very clear that they're going defend the Affordable Care Act, better known as Obamacare. And in fact, Professor Gruber last week on MSNBC, speaking to Ronan Farrow backpeddled on the comments which hasn't stopped the Republicans from using those comments as fuel. They really want to get votes going to repeal all or parts of Obamacare. But the President has, essentially, said been there, done that. Let's listen a little bit more what he had to say before he came back from Australia.

OBAMA: We have a year-long debate, Ed. I mean, look at your stories. The one thing we cannot say is that we did not have a lengthy debate about health care in the United States of America.

JANSING: It's going to be a critical time coming up though, because support for Obamacare is dropping. It's incredible the disparity between Republicans and Democrats. This new poll from Gallup shows 74% of Democrats approve of the Affordable Care Act. Just eight percent of Republicans. Again, they feel like they have gotten their constituency at their back to have these repeal votes. So, HHS Secretary Sylvia Burwell, if you saw her yesterday on Meet the Press, she was defending it. She was touting the fact that on the first day of this new enrollment, which started over the weekend, 100,000 people signed up. She's also in Florida today. Much smarter than being here, where it's a cold rain. And she's going to be pushing people to register. But we're going to be watching very closely, both what happens on the hill and how many people are registering, Tamron.