ABC: Chris Christie 'Lashes Out' While Hillary Shows 'Softer Side'

Good Morning America's Jon Karl on Thursday couldn't help but contrast Chris Christie and Hillary Clinton as "lashing out" vs. the "softer side." Featuring the two possible 2016 contenders, George Stephanopoulos chided, "We're going to turn to politics now and New Jersey Governor Chris Christie lashing out on the stump." An ABC graphic underlined, "Caught on Camera: Chris Christie Lashes Out."

The New Jersey governor got into a verbal battle with a protester. The GMA journalists ignored the fact that the man involved, Jim Keady, is a Democrat and blogger for the liberal Huffington Post. Instead, Karl compared, [Christie's] blunt style stood in stark contrast with the softer side that new grandmother and likely Democratic candidate Hillary Clinton showed as she campaigned, Wednesday, in Iowa." [MP3 audio here.]

Karl then included a clip of Clinton quietly recounting, "And all of a sudden, she reaches this little finger up to my mouth. She goes, 'no sing, mommy. No sing.'" On GMA, it's quite the contrast next to Christie screaming at the top of his lungs: "Someone like you, who doesn't know a damn thing about what you're talking about...Sit down and shut up!"

A transcript of the October 30 segment is below: 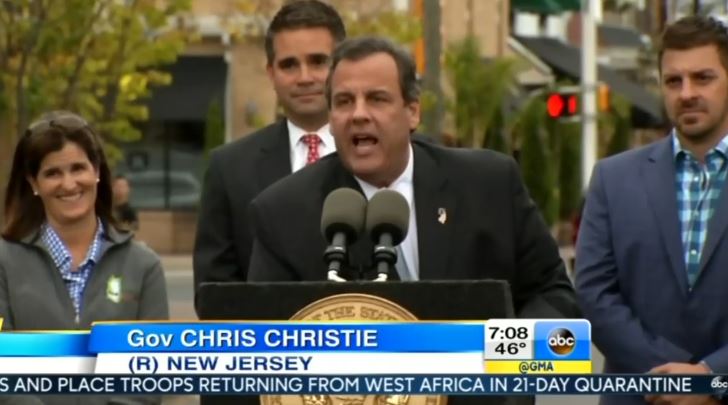 GEORGE STEPHANOPOULOS: We're going to turn to politics now and New Jersey Governor Chris Christie lashing out on the stump. The presidential hopeful confronting a protester at an event marking two years since Hurricane Sandy. ABC's Jon Karl joins us from the White House. And, Jon, this is signature Christie. Some love it, some don't.

KARL: George, it's been a while since we saw an eruption like this one, but it was classic Chris Christie. It's exactly why some people love him.

KARL: And why some hate him.

CHRISTIE: Turn around. Get your 15 minutes of fame.

KARL: New Jersey Governor Chris Christie got tough with a protester, Wednesday, during what was supposed to be a victory lap heralding the rebuilding of the Jersey shore on the second anniversary of Super Storm Sandy.

KARL: But that protester said Christie hasn't done enough to help storm victims. The governor has long been known for his outbursts.

CHRISTIE: Did I say on topic?

CHRISTIE [montage]: Are you stupid? You conduct yours like that in the courtroom, your rear end's going to get thrown in jail, idiot. I don't give a damn about election day. It doesn't matter a lick to me at the moment. 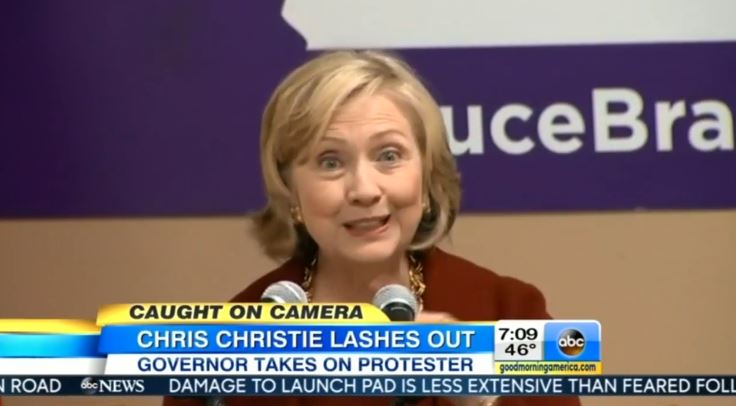 KARL: But this time around, Christie is a potential presidential candidate. His blunt style stood in stark contrast with the softer side that new grandmother and likely Democratic candidate Hillary Clinton showed as she campaigned, Wednesday, in Iowa.

HILLARY CLINTON: And all of a sudden, she reaches this little finger up to my mouth. She goes, "no sing, mommy. No sing."

KARL: Shortly after the confrontation, Christie said he likes a good back and forth, and, quote, "there's still plenty of Jersey in me." There's no doubt about that, Robin. Less clear is how that style would play in a presidential campaign.