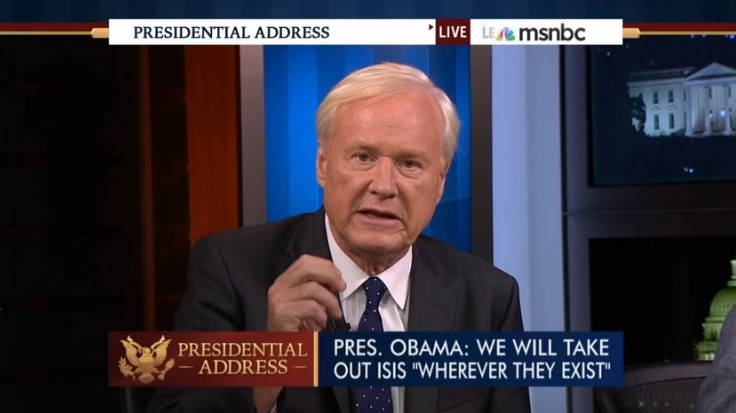 During the final segment of MSNBC's coverage of Barack Obama's brief Wednesday night speech -- in which the Democratic occupant of the White House called for air strikes in Iraq and Syria to combat the ISIS terrorist group -- Hardball host Chris Matthews used the occasion to hammer former Vice President Dick Cheney as the cause, not just of the current president's problems in the Middle East, but of creating Islamic terrorism as a whole.

“Please do not listen to Dick Cheney,” Matthews advised Obama. “He’s the one that created al-Qaeda by taking over the holy land in Saudi Arabia. He’s the one that de-Baathicized [sic] the Iraqi government. He created ISIS, and he’s coming back again with more advice.”

Apparently, Matthews and other contributors on MSNBC have a limited grasp of geography since the U.S. placement of Air Force units was at the Prince Sultan Air Base in al-Kharj, more than eight hours away from the "holy land" of Mecca.

The other MSNBC hosts all agreed (in less explicit terms) that all this was a Bush-Cheney mess, in slightly less fervent tones. Rachel Maddow echoed “The consequences of the war in Iraq was the creation of the group that is now called ISIS. There was no al-Qaeda in Iraq before we invaded Iraq in 2003; that is the group that eventually became this group that we are now fighting.”

Nevertheless, while a guest on Morning Joe on the 13th anniversary of 9/11, the liberal anchor continued his diatribe against Cheney, suggesting he caused 9/11:

MATTHEWS: We're not even sure of this yet, the connection between what we did back in Saudi Arabia in 1990, putting all those tens of thousands of troops into the holy land of Mecca and all that, and what that really did to stimulate or trigger or justify in the hearts of the suicide bombers of 9/11.

What role did that play? And we had no idea that would do that. And of course, the decisions we made in Iraq about getting rid of the Sunnis and the government and de-Baathicizing [sic] and sending those people off to join ISIS.

Truth Revolt reported Matthews also trotted this line out on the Reid Report:

MATTHEWS: This has been a chain reaction since we put troops in Saudi Arabia, the holy land of Mecca; tens of thousands of troops back there in 1990 because Dick Cheney said to do that. He talked the royal family into letting us desecrate the holy land. Out of that comes al Qaeda. Then we go into Iraq according to Dick Cheney and the neocons, Bush W. We knock out the Iraq government; throw the Sunnis out, de-Baathicize. They become ISIS. These steps taken by both sides lead to the next step -- we attack by air against ISIS, they behead our people. So the President tonight will announce a number of steps and they'll probably be essential or necessary, they will certainly be popular. The question is, what will the reaction to that be? And what will our reaction to that be? This is going to continue as it has since 1990.

Joy Reid just agreed, rehashing with all the usual fervor that Cheney created "the worst foreign policy disaster in the history of the country." Matthews lamented that Obama was dragged into war by an overreacting American public who are giving the terrorists exactly what they want:

MATTHEWS: Now we're going into Syria. Do we really think a bombing campaign of ISIS isn't exactly what they wanted us to do when they started beheading our people? That's what they want. They draw us into more warfare. This is tricky because even though I can analyze it sitting here, it's easy to do what I’m doing, the hard thing is for the President to analyze it and also deal with the tremendous, visceral, gut American reaction to the sight of Americans being beheaded which we declared in our polling to be the biggest news story in five years. Certainly, he's reacting to that. We better be careful here. Don't react all the time in the same mechanical way that's expected by our enemy because they will come up with a new set of tricks.