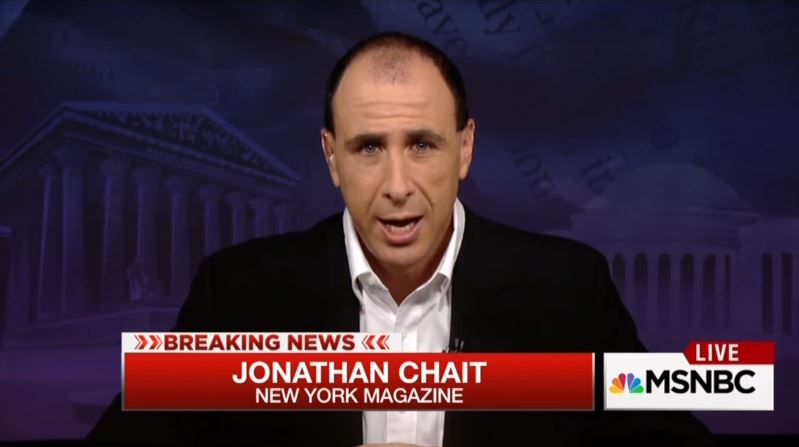 Chait thinks it’s likely that the Trump administration will “carry out enormous amounts of terrible policy,” but that its terribleness, its enormity, or both will be limited by Trump’s bungling:

There is no reason to believe Trump is actually good at politics…The only things he has done well are to gauge correctly the fecklessness of his Republican rivals, who he understood would fall in line behind him even after he smeared and bullied them mercilessly, and to beat up on Hillary Clinton while James Comey, Vladimir Putin, and the national media pinned her arms behind her.

…[Trump’s] promise to provide terrific health insurance that covers everybody, at lower cost? Forcing Mexico to pay for the wall?...The complete eradication of Islamic terrorism? The most competent president would not achieve these goals. And Trump is a political amateur who has surrounded himself with other political amateurs.

In general, Chait, like Obama, endorses the bends-toward-justice view of history associated with (though not originated by) Martin Luther King. In that scenario, Trump “represents the death rattle of a declining vision of American retrenchment, and Obama represents the future. The civic values our grandchildren will celebrate and be taught in schools will be Obama’s, not Trump’s…Life in the United States is better -- more affluent and more egalitarian -- than it was 50 years ago, and 50 years ago it was better than 50 years before that, at which point it was better than a half-century before.”

Nonetheless, Chait notes, there’s always someone standing in the way of progress: “What we now call the struggle between red and blue America was the same basic divide that pit [John Quincy] Adams against Andrew Jackson,” who faced off in the 1828 presidential contest. Jackson was elected, but “in the long run, Adams’s ideas won out. Slavery was abolished in 1865, a national bank was established in 1913, and the federal government actively invested in education and infrastructure, all as Adams had dreamed.”

(A few days earlier, Chait had written that “as the Republican Party has grown more uniformly conservative, it has naturally grown more Jacksonian in its style. The cultural populism, anti-intellectualism, paranoia, and crude nationalism of such figures as Joe McCarthy, George Wallace, and Sarah Palin presaged the buffoonish ravings of the current president…We should stop seeing Trumpism as a challenge to the GOP and instead understand it as the party’s natural historical evolution.”)

According to Chait, the Women’s March the day after Trump’s inauguration and last weekend’s protests over his executive order on immigration “have drawn on powerful American ideals: inclusion, social mobility, and optimism. Obamaism may have lost control of the levers of government, but it has never lost the country.”

Chait’s book Audacity: How Barack Obama Defied His Critics and Created a Legacy That Will Prevail was published in mid-January.