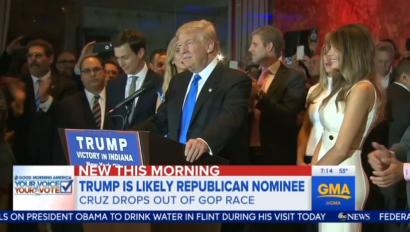 A few days ago, Vanity Fair reported that Donald Trump is “considering creating his own media business, built on the audience that has supported him thus far in his bid to become the next president of the United States.” New York pundit Jonathan Chait thinks such a venture “makes sense” since there’d be a “numerically large” ready-made audience for its fare.

“Perhaps [Trump] grasps a truth the official Republican Party has refused to acknowledge: The conservative base is a subculture,” wrote Chait in a Thursday post. “It is a numerically large subculture, but a subculture nonetheless. It rejects the moral values of the larger society and wallows within its own imaginary world, in which Barack Obama is a foreign-born agent of anti-American interests, global warming is a lie concocted by greedy scientists or perhaps the Chinese, and hordes of foreigners are rendering the United States unrecognizable.”

Chait suggested that success for a Trump media company would come at the expense of the GOP establishment (bolding added):

The greater the gulf between the reality perceived by Trump’s supporters and the reality experienced by the rest of the world, the worse for the Republican Party, but all the more profitable for the media that can cater to their delusions. Figures like Rupert Murdoch, Ann Coulter, and Rush Limbaugh have grown rich doing so. Trump may have figured out that there’s no reason he should work for them when he can cut out the middleman.