UPDATE, May 27: A writer at the BreakingDefense.com website estimates that Mainland China's defense spending on a Purchasing Power Parity basis is $434.5 billion, and that its spending plus Russia's PPP spending of $157.6 billion is only about 2 percent below the USA's $606 billion.

Williams condemned Trump's speech as "wrapped in patriotism ... the flag, and ... the military," and claimed that his appearance was really about co-opting the military's "high approval ratings among the American people to transfer to him."

Williams's attack, though predictable, was accompanied by a significant distortion of U.S. military spending compared to the rest of the world which the remaining show panelists did not challenge.

Before getting into his rant, Williams thought it necessary to mention protesters outside of Trump's speech. Even Michael Shear at the New York Times, who wrote a 1,250-word story on the event, saw no reason to mention them, likely because they numbered only "about" 10 to 20:

KENNEDY: (This speech was) somewhat refreshing.

KIMBERLY GUILFOYLE: You know, a lot of people enjoyed this, Juan. I hope you did, too.

What's interesting to me is to come and listen to you guys, and you know there were protesters outside, a couple protesters, I don’t think a whole lot. But people standing there —

JESSE WATTERS: Those are for you, Juan.

WILLIAMS: Okay. And then inside the kids ("Kids?" — Ed.) were pretty respectful, but that was about it. But you guys call it rousing. I’m interested.

I think that’s, Jesse, why he spent time. He wants them and their stamp of approval and their high approval ratings among the American people to transfer to him. But when you think about —

WATTERS: Do you think he's giving a rousing patriotic speech because he wants to boost his approval ratings?

WATTERS: Maybe he's just proud of the country and wants to address the cadets.

GUILFOYLE: Through the cadets?

WILLIAMS: No, because let’s look at the, let's look at the substance of it. When he talks about oh, we’re going to make the military stronger and all that — Wait a minute, our military is the strongest in the world!

WATTERS: And we’re going to make it even stronger. What’s wrong with that?

WILLIAMS: When you suggest, when he suggests that —

GUILFOYLE: He's right It was underfunded under President Obama, the Nobel Peace Prize guy, that every day he was in office we were at war.

WILLIAMS: Let me just tell you something. That is an echo in the conservative chamber. But the fact is we have a military that Sunday funded at 20 — I think the top 20 other militaries in the world don’t have as much funding as our military. That's just a fact. 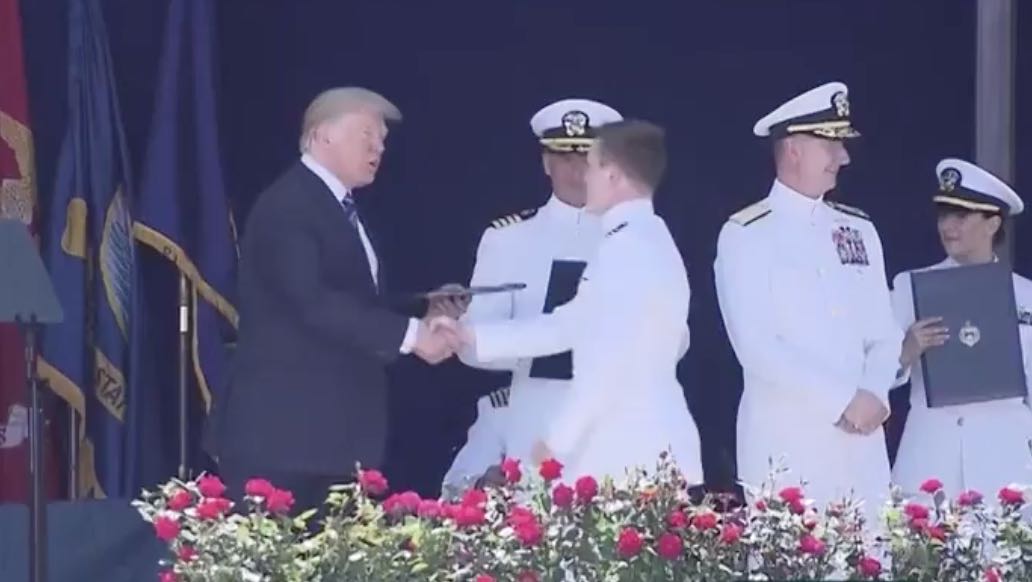 We can't know for sure, but when Williams referred to "why he (Trump) spent time," he was likely referring to Trump's decision to remain after the speech to shake hands with every one of the 1,042 graduating cadets. If that's true, Williams believes that Trump's much-appreciated gesture was merely another cynical political ploy.

As to Williams's claim that "the top 20 other militaries in the world don’t have as much funding as our military," it's amazing how he turned an "I think" speculation into "just a fact" in about five seconds.

Whatever you want to call it, it's wrong.

U.S. military spending is greater than the total of the top 7 or top 10 other nations, depending on the measuring source referenced. The first source listed in the following table is from the International Institute for Strategic Studies (IISS), while the second is from the Stockholm International Peace Research Institute (SIPRI):

The two lists differ sharply on Mainland China, partially because of that country's weak transparency, and partially because "Chinese official figures do not account for a number of military-related outlays that are often included in the budgets of other countries."

Additionally, funding is hardly the sole comparative benchmark for military might. China has an active military contingent of 2.2 million, despite having "no bases on foreign soil" and forces which are "primarily focused within the Asia-Pacific." That's far larger than the USA's 1.35 million active force, which maintains a global military presence.

As to which presidents believed in the military, it's fair to say that Bill Clinton and Barack Obama did not: