Longtime liberal pollster Stuart Rothenberg apparently had a hard time handling President Donald Trump's visit to West Virginia on Thursday. During that visit, Mountain State Governor Jim Justice officially announced his switch to the Republican Party, thereby consolidating full GOP control over the executive and legislative branches in that state, and bringing the total number of Republican U.S. governors to 35.

Reacting to Trump's visit and this stunning news, which further confirms how the Democratic Party has lost touch with working people and Middle America in general, Rothenberg published two of the most condescending and insulting tweets one will ever see directed at an entire state's population.

Here they are (direct links are here and here; at the time this post was drafted, they were still present, almost a full day after they were published; H/T Twitchy via Instapundit):

Many West Virginians are indeed having a harder time supporting themselves. That's not a character flaw. Instead, it is a direct and deliberate result of the Obama administration's war on coal.

The Media Research Center produced Collateral Damage: Forgotten Casualties of the Left’s War on Coal, a moving documentary film on that very topic in November 2016 (trailer here; complete film here). How are you supposed to support yourself when federal government rules and regulations, based entirely on a hoax, take your livelihood away from you while offering nothing to replace it?

With that first tweet, the snide Rothenberg was just getting started.

"Close-minded, provincial, angry, easily misled"? His reference to his wife's dad in Pennsylvania, who one would think he considers absolutely despicable (or, I should say, deplorable), was a pathetic attempt to soften the blow.

As might be expected, outraged responses poured into Twitter, accompanied by little if any support for Rothenberg:

"The snide, nasty, dripping condescension is why we have Trump."

"... as someone who comes from the region that is incredibly bigoted -- people from West Virginia are incredible hard-working folks." (This comment caused Rothenberg to publish the his second tweet.)

"... this is exactly how folks from WV think the cosmopolitan class views them & then they prove it."

"All of my college classmates from WVA went home after school and supported themselves. Funny most from DC and suburbs went back and couldn't."

"'Close-minded, provincial, angry, and easily misled.' So I guess they're qualified to be D.C. political reporters?"

"This is why we snort in derision when liberals say they are compassionate and the right is full of hate. Proven over and over to be a lie."

One would think that Rothenberg might have acquired some humility during the past eight years, given two firm predictions he has made during that time which turned out to be totally and horribly wrong. Nope.

The first was this claim in April 2009 (bolds are mine throughout this post):

April Madness: Can GOP Win Back the House in 2010?

... the chance of Republicans winning control of either chamber in the 2010 midterm elections is zero. Not “close to zero.” Not “slight” or “small.” Zero. 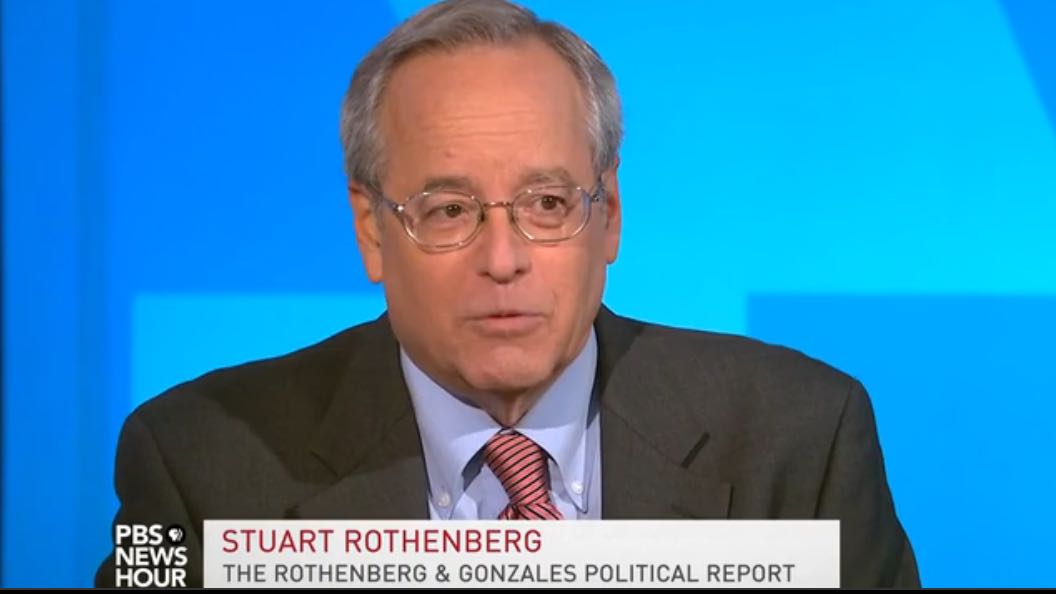 Rothenberg doesn't get a pass because he wrote this 19 months before the midterms. He knows that 19 months is a lifetime in politics, but wrote what he did anyway in hopes of demoralizing the opposition. Republicans picked up 63 House seats in the 2010 midterms, taking a decisive 242-193 majority. The GOP also picked up six Senate seats (Democrats maintained a 51-47 majority), and increased their cadre of state governors by six.

The second prediction which was totally wrong occurred three weeks before Election Day 2016, when he unconditionally declared in the Washington Post that Hillary Clinton would win the presidency. Rothenberg clearly relished the idea that Trump would surely lose:

The trajectory of the 2016 presidential race — which will result in a Hillary Clinton victory — remains largely unchanged from May, when Donald Trump and Clinton were in the process of wrapping up their nominations.

... Trump’s supporters have not turned on him. But he trails badly with only a few weeks to go until Nov. 8, and he must broaden his appeal to have any chance of winning. That is now impossible.

... Trump is and has been a disaster as a presidential nominee, and that will not change in the campaign’s final days.

... It would be a mistake to call Trump’s current path to an electoral-college victory narrow. It is nonexistent. Pennsylvania, Michigan and Wisconsin, once part of the Trump scenario, have never been “in play” ...

... Clinton is headed for solid popular-vote and electoral-vote victories that are larger than Obama’s were over Romney. ...

... the most important question is no longer whether Trump or Clinton will win but how large Clinton’s margin will be and whether she will have coattails.