Thursday, while barely covering any of the substance of the confrontation, the AP reporter usually on the books beat irresponsibly launched into a smearing, sneering tirade equating Miller's viewpoints with "members of the far-right community, including such white supremacists as David Duke and Richard Spencer."

Here are excerpts from Italies's idiocy: 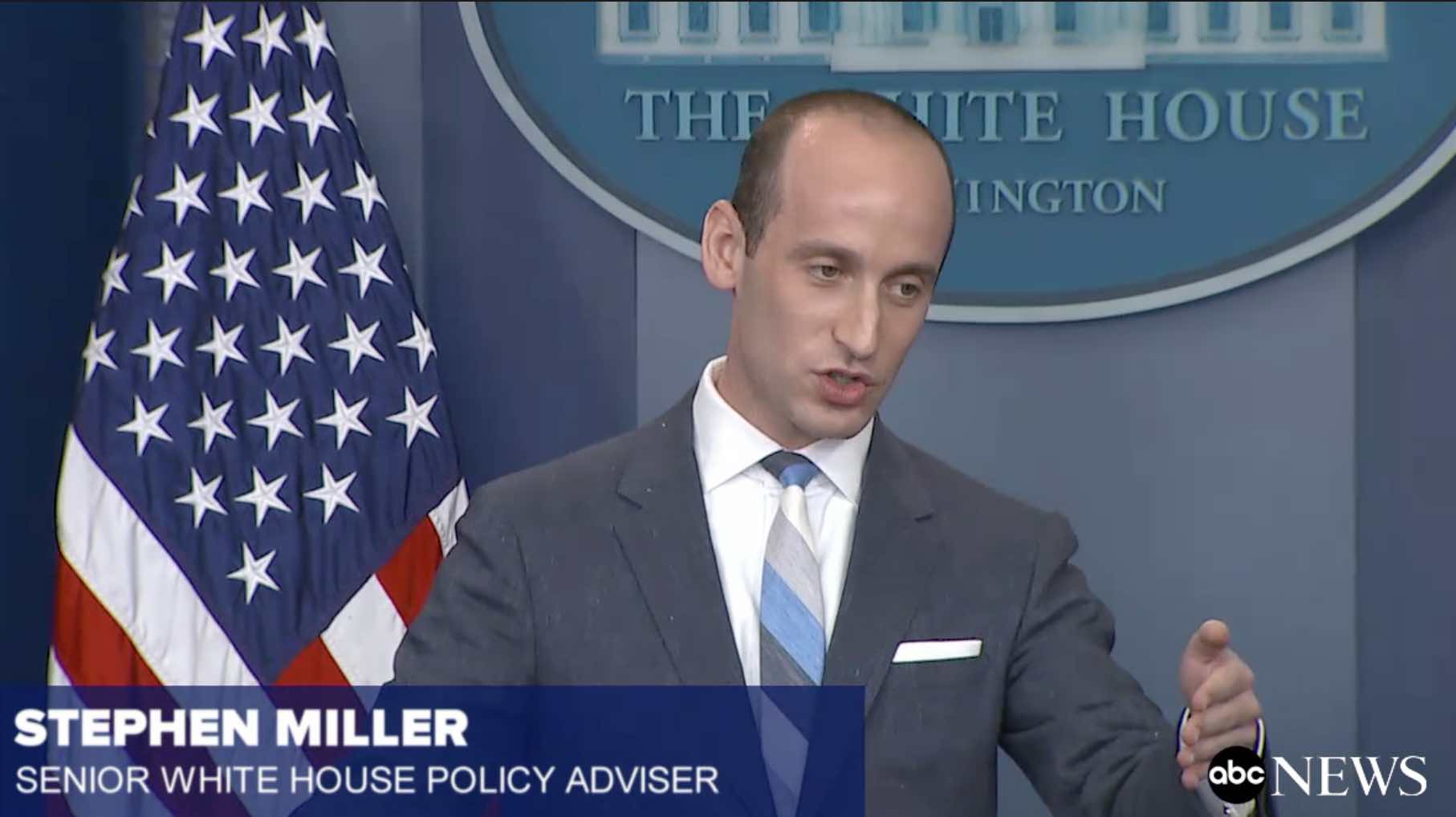 When senior White House aide Stephen Miller disputed the significance of Emma Lazarus’ poem on the Statue of Liberty, he wasn’t stating a new opinion.

Members of the far-right community, including such white supremacists as David Duke and Richard Spencer, have harshly criticized the poem and even used anti-Semitic language.

“It’s offensive that such a beautiful, inspiring statue was ever associated with ugliness, weakness, and deformity,” Spencer tweeted in January, referring to such words by Lazarus as “wretched refuse.”

This is miles beneath contempt.

Miller merely pointed out that "The poem that you’re referring to, that was added later, is not actually a part of the original Statue of Liberty." He did not criticize the poem, but instead correctly recounted the history while adding that a poem, no matter how noble its sentiments, doesn't drive national policy.

But Hillel Italie apparently considers any people who believe that current immigration policies should be less generous in any way to be "alt-right" and "white supremacists." The left and the press, but I repeat myself, have clearly never gotten past believing that half of President Donald Trump's supporters belong in Hillary Clinton's "basket of deplorables ... racist, sexist, homophobic, xenophobic, Islamaphobic -- you name it."

The press, now obviously including the AP, has been using Richard Spencer as some kind of threatening alt-right monster for almost two years now. The fact of the matter is that Spencer can't even fill a mid-sized hotel meeting room with his followers (275 appears to have been his high-water mark in late November). Just about wherever he goes, the number of journalists present outnumber his supporters.

Trump has disavowed the alt-right on numerous occasions. Spencer turned against Trump in April. Thus, there's no valid association between them whatsoever. The Trump administration believes that the immigration system needs to be reformed to put all American families, all legal U.S. workers, and national sovereignty first — sentiments held by most Americans. Spencer does not.

Perhaps because he knew how weak his associations of Miller were with Richard Spencer and David Duke, Italie decided to artificially broaden the definition of alt-right:

Among those praising Miller was Breitbart News, the alt-right publication once headed by Steve Bannon, now Trump’s chief strategist. “Trump Adviser Miller Schools Acosta: Statue of Liberty Poem on Huddled Masses Added Later” reads a headline on breitbart.com. The White House did not immediately respond to a request for comment.

The Breitbart "alt-right" smear, with "alt-right" narrowly defined, as Italie effectively did, as "including ... white supremacists" and "anti-Semitic language," doesn't stand up to scrutiny.

The suspicion here is that there's more than a little professional jealousy at work. In April, Breitbart was in the top 30 U.S. news sites for web traffic, i.e., it's a mainstream center-right site whose traffic exceeded, among many others, NPR, ABC News, the Wall Street Journal, and the Los Angeles Times.

The AP's websites didn't crack the top 100. Though the wire service's content is obviously pervasive because of its vast number of subscribing outlets, the fact remains that the AP's two primary websites — AP.org and APnews.com — had no more than one-third of Breitbart's traffic, and likely quite a bit less than one-third. As of Thursday evening, Breitbart's U.S. Alexa rank was 69. AP.org was at 1,223, with a steep decline since September of last year; and APnews.com was at 1,355.

Miller blasted Acosta on at least four other fronts besides Acosta's attempt to directly associate the poem added later with the Statue of Liberty itself (falsely describing Miller's statement as "some National Park revisionism"):

Almost none of this made it into Hillel Italie's dispatch. Instead, the reporter chose to quote a 1986 speech by President Ronald Reagan:

... During a 1986 ceremony marking the statue’s centennial, President Ronald Reagan noted Lazarus’ “very special dedication” and emphasized the statue’s importance not just to “immigrants who stand out” but to “those whose names are remembered by only a few.”

“Many of them passed through this harbor, went by this lady, looked up at her torch, which we light tonight in their honor,” Reagan said. “They were the men and women who labored all their lives so that their children would be well fed, clothed, and educated, the families that went through great hardship yet kept their honor, their dignity, and their faith in God. They passed on to their children those values, values that define civilization and are the prerequisites of human progress. They worked in our factories, on ships and railroads, in stores, and on road construction crews. They were teachers, lumberjacks, seamstresses, and journalists. They came from every land.”

This Reagan speech has absolutely nothing to do with yesterday's Miller-Acosta confrontation. The immigrants to whom Reagan referred came here legally. Once upon a time were heavily vetted, and only a relatively limited number of them were allowed to enter the U.S. in any given year.

As John Hinderaker at Powerline observed:

I wish I could say that Hillel’s smear is unworthy of the Associated Press, but the unfortunate reality is that smearing President Trump and members of his administration is the AP’s main project these days. Actual news reporting falls far down the priority list.

We're long past the point where news organizations which subscribe to AP content should get a pass for doing so — unless they're also comfortable with the AP's smears. In that case, they too should be avoided to the extent the AP's websites currently are.