In remarks so bizarre and out of touch that satirists at outlets like The Onion would have rejected them if someone had suggested their inclusion in a made-up story, London's police chief has described the diversity of the city's London Bridge terror attack victims and witnesses interviewed as positive things.

Gregory Katz at the Associated Press did his part to play along with the charade by failing to identify the lack of diversity among those who carried out the attack.

"Diversity" has apparently become so obsessively important that the need to comment on it in a positive fashion at every turn has clearly overwhelmed basic common sense.

Here are the first six paragraphs from Katz's Saturday morning report (bolds are mine throughout this post): 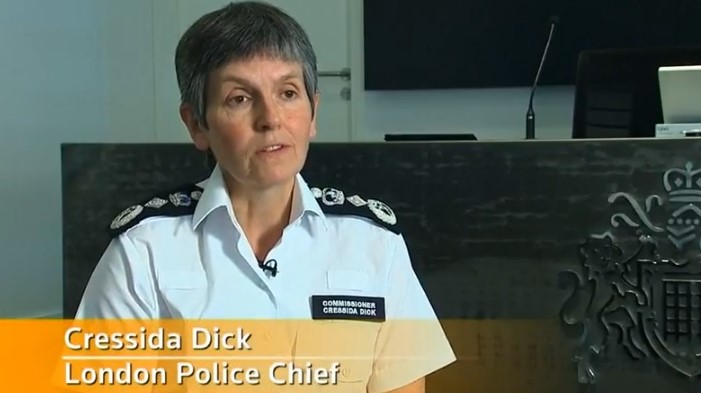 The commissioner of London’s Metropolitan Police says the nationalities of the eight victims in the terrorist attack on London Bridge tell a proud story of London’s unique makeup.

“It’s desperately sad and poignant but among those who died is someone who’s British, there are French, Australian, Canadian, Spanish,” Cressida Dick told The Associated Press in an interview Saturday.

“In terms of our witnesses that we’ve spoken to so far, out of the 300-odd people, there are about 20 different countries of origin. And the London British population comes from all kinds of backgrounds and every kind of faith and ethnicity.”

She said longtime Londoners value this international aspect of the British capital.

“We believe of course that that’s what makes our city so great,” she said. “It’s a place where the vast majority of time it’s incredibly integrated and that diversity gives us strength.”

But suddenly it was time to cease all discussion of diversity, as Katz described what has happened since Ms. Dick assumed the helm at Scotland Yard:

Since then a crowded Manchester concert featuring the pop singer Ariana Grande was hit by a bomber and three knife-wielding men in a rented van attacked civilians in and around London Bridge.

Do the attackers and others who have been "arrested" in connection with these plots — "arrested" is in scare quotes for reasons which will become plain shortly — possess the same treasured "diversity" as the victims? Hardly, and as is usually the case with the press, Katz clearly avoided describing their common characteristics.

Sadly, almost no one in the press dares to observe the utter lack of diversity among terrorist attackers. As has almost invariably been the case since 9/11, those who carried out the two most recent UK attacks were Muslims with a jihadist mindset. That combination has proven itself to be the greatest current enemy of genuine diversity and ethnic and cultural camaraderie on earth.

Regarding the Manchester Arena bombing on May 22, which at last count has left 23 victims dead and 119 injured (23 critically), the facts are these:

Instead of uncritically taking dictation from London's police chief, reporters like the AP's Katz might consider looking into whether the quick releases of most of those arrested after these two attacks indicate that post-attack police "roundups" really represent a form of street theater designed to make it appear as if officials are accomplishing something when they really aren't.

Returning to the main theme, there's not a lot of precious "diversity" among the attackers because those involved never got the memo that there's nothing wrong with racial and ethnic "diversity" in a society as long as its members buy into that society's fundamental values.

The reason they never got the memo is that it hasn't been sent to new arrivals in the UK and many other western nations for years.

Thus, we have large numbers of people who have emigrated to countries with centuries of democratic institutions, traditions, and values who hold core beliefs that are hostile to those found in their host countries. Among them: that Muslim "sharia" law should predominate in their enclaves; that routine police presence is not welcome (hence the appearance of "no-go zones" throughout Western Europe); and that women, individually and collectively, should be subjugated to the will of men. As Andrew McCarthy wrote of radical Islam after March's Westminster attack in the UK: "Islam, thus understood, is not non-Western. It is anti-Western."