There have certainly been less mature reactions than what was seen at the Associated Press Thursday afternoon to President Trump's decision to withdraw from the nonbinding Paris climate accord.

However, given that the AP is supposedly a wire service whose mission is merely to deliver objective news — one long since abandoned, but to which it still gives lip service — the decision of reporters Julie Pace and Jill Colvin to go after Trump's "I was elected to represent the citizens of Pittsburgh, not Paris" statement almost immediately after the announcement to remind readers that the Steel City supported Hillary Clinton in the presidential election was extraordinarily and embarrassingly childish.

The pair's initial Thursday afternoon reports have mostly been sent down the memory hole and replaced by newer content at the AP's and the vast majority of subscribing outlets' websites.

Unfortunately, the AP is getting "better" at flushing and replacing prior content, an irresponsible yet predictable maneuver for an entity which apparently wants to drive the news conversation while escaping accountability. The current instance is from all appearances an object example of the AP trying to conceal what it originally reported, even though its first rendering is likely what most Americans who were following news of Trump's announcement actually read.

Fortunately, an early dispatch is still present at the Pittsburgh Post-Gazette. Here are its opening paragraphs (bolds are mine):

‘I was elected to represent the citizens of Pittsburgh, not Paris’: Trump pulling U.S. from global climate pact, dismaying allies 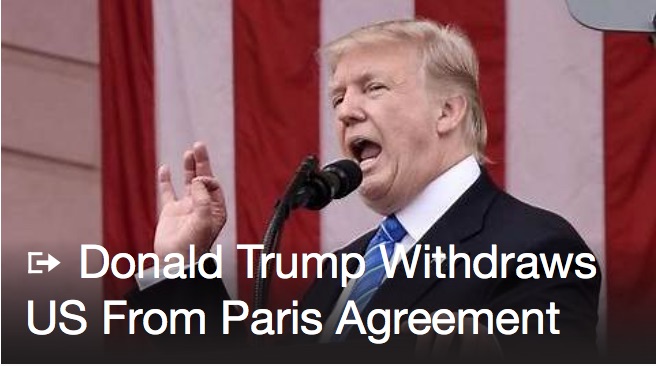 President Donald Trump declared Thursday he was pulling the U.S. from the landmark Paris climate agreement, striking a major blow to worldwide efforts to combat global warming and distancing the country from its closest allies abroad.

Framing his decision as “a reassertion of America’s sovereignty,” Mr. Trump said the U.S. could try to re-enter the deal under more favorable terms or work to establish “an entirely new transaction.” But he indicated that was hardly a priority. “If we can, great. If we can’t, that’s fine,” he said.

Scientists say Earth is likely to reach more dangerous levels of warming sooner as a result of the president’s decision because America’s pollution contributes so much to rising temperatures. Calculations suggest withdrawal could result in emissions of up to 3 billion tons of additional carbon dioxide a year — enough to melt ice sheets faster, raise seas higher and trigger more extreme weather.

By abandoning the world's chief effort to slow the tide of planetary warming, Trump was fulfilling a top campaign pledge. But he was also breaking from many of America's staunches (sic) allies, who have expressed alarm about the decision.

"I was elected to represent the citizens of Pittsburgh, not Paris," the president said during his speech. Allegheny County was won by Democratic presidential candidate Hillary Clinton in the November election. In Pittsburgh, Clinton won 114,847 votes, while Trump won 31,805.

Too bad for Pace, Colvin and the left that Trump genuinely won Pennsylvania, while Hillary Clinton's alleged "wins" in Allegheny County and the City of Pittsburgh weren't wins at all.

Naturally, the pair went to Pittsburgh's mayor to get his delusional response:

Pittsburgh Mayor Bill Peduto responded on Twitter: "As the Mayor of Pittsburgh, I can assure you that we will follow the guidelines of the Paris Agreement for our people, our economy & future."

"Delusional" is a word which was not casually chosen.

As the AP pair finally explained in Paragraph 20:

Under former President Barack Obama, the U.S. had agreed under the accord to reduce polluting emissions by more than a quarter below 2005 levels by 2025. But the national targets are voluntary, leaving room for the U.S. and the nearly 200 other countries in the agreement to alter their commitments.

Contrary to the AP's claim, Obama did not "agree" to have the U.S. reduce emissions. He pledged to do so in a nonbinding "accord" deliberately engineered to avoid the need to obtain the two-thirds U.S. Senate majority required to approve any treaty. The Paris accord was in reality a dangerous step towards having the world's leaders escape their own countries' democratic institutions by making promises to themselves, and counting on relentless, fact-free peer pressure to enforce them. The hysterical reactions of so many world leaders to Trump's decisions demonstrates this.

But if we hold Pittsburgh Mayor Peduto to his word to "follow the (Paris) guidelines," he's promising to force his city's citizens to reduce their collective greenhouse gas emissions by 26 percent to 28 percent, the actual figures represented by the AP pair's more innocuous-sounding "about a quarter," in eight years compared to the 2005 level.

It is a virtual metaphysical certainty that this won't happen. But if it does, it will only be accomplished by imposing draconian limits on vehicle usage, heating, air conditioning, and commercial, retail and industrial activity which will catastrophically harm the Steel City's economy. Unfortunately for Mayor Peduto and fortunately for everyone else, U.S. citizens still have the freedom to vote with their feet and move elsewhere if conditions become unbearable.

The overwhelmingly likelihood — far more "likely" than the AP pair's ridiculous claims about melting ice sheets, rising sea levels and more extreme weather (links are to on item each out of so many which refute them) — is that the mayor doesn't genuinely mean it, and is instead engaging in all too typical leftist virtue-signaling. One can virtually bet the house on the fact that Pittsburgh won't come anywhere near meeting the Paris accord's 26 percent to 28 percent reduction target.

Getting back to the AP's reference to the election, one supposes that Pace and Colvin thought they were being pretty cute. But the fact is that the U.S. president has a serious responsibility to represent the best interests of the entire country, including voters in Pittsburgh who didn't pull the lever for him. That Trump believes he is doing this, and is specifically saying so, stands in stark contrast to his presidential predecessor, whose administration's regulatory war on the states which didn't support him electorally — especially on the environmental front — could not have been more obvious.