A Sunday item in the San Francisco Chronicle covered what reporter Justin Phillips has found is a major challenge for that city's restaurateurs. You see, many of them are struggling with how much virtue-signaling is appropriate in the wake of the election of Donald Trump and that city's defiant insistence on remaining an illegal-immigrant sanctuary.

In light of a recent Harvard study on the effect of higher-than-market minimum wages and dismal jobs data from the government, restaurateurs and the press which covers this industry and several others need to look harder at another far more important issue: how many of these establishments will be unable to remain in business.

The Harvard working paper has been out since April 11, and the establishment press outside of the Bay Area has largely ignored it. A search on "Harvard minimum wage" (not in quotes) at the New York Times returns no directly related story, but it does list an April 18 column by the paper's Paul Krugman quoting Elizabeth Warren. The Democratic Massachusetts Senator persists in claiming (with Krugman's agreement) that "study after study shows that there are no large adverse effects on jobs when the minimum wage goes up." Obviously, the recent Harvard paper wasn't on either person's radar.

The Chronicle finally got around to covering the study's findings on Saturday. It got off to a bad start with what can only be seen as a misleading headline, while its content had additional flaws (bolds are mine throughout this post):

(The Harvard paper only looked at the effect of minimum-wage increases, and not "costs" in general. — Ed.)

Authors of a new Harvard Business School study say they have confirmed a theory argued over in restaurant circles and talk radio shows alike: The rate of Bay Area restaurant closures can be tied to the region’s rising minimum wage levels. 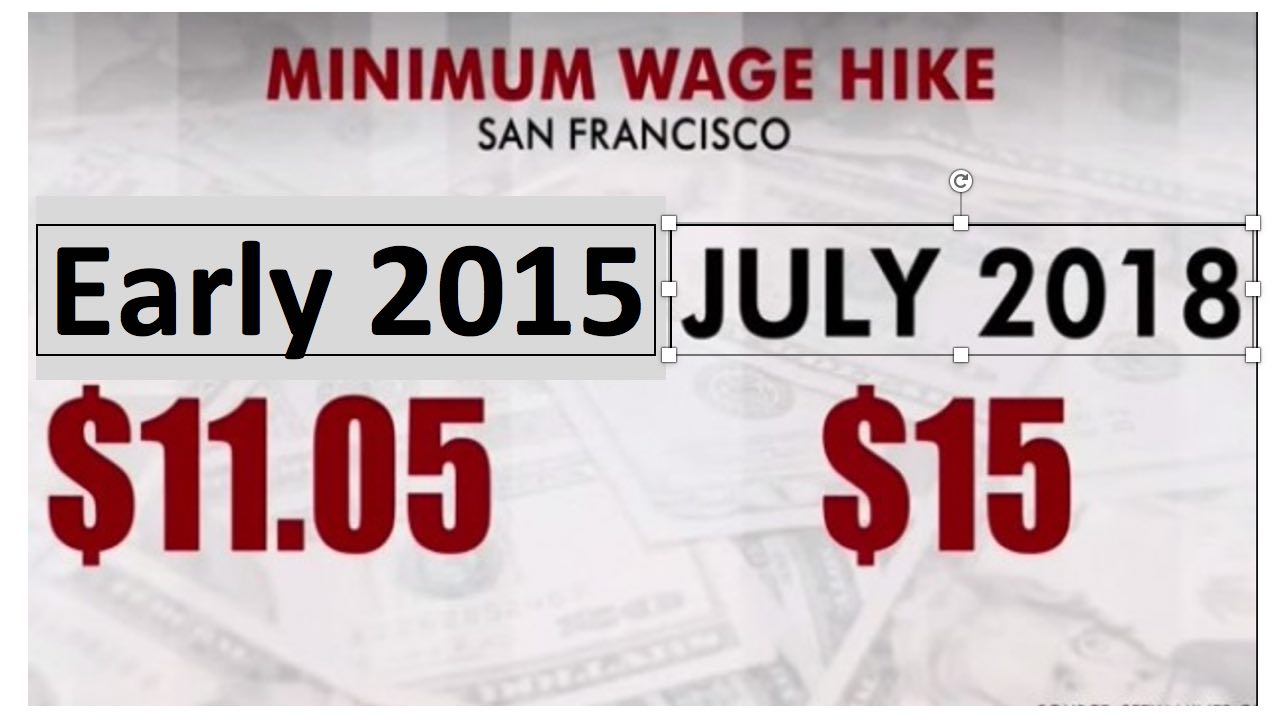 But the research adds a significant asterisk to the impact of wage hikes: The lower an area restaurant’s Yelp rating, the higher its risk of shutting down.

In an April 11 working paper titled “Survival of the Fittest: The Impact of the Minimum Wage on Firm Exit,” researchers Dara Lee Luca and Michael Luca analyzed Yelp ratings to track some 35,000 restaurants in the Bay Area from 2008 to the end of 2016.

... For the average restaurant, with a 3.5 star rating on Yelp, the risk of closing goes up 14 percent for each $1 the minimum wage rises. “That’s a substantial effect,” researcher Michael Luca said. Restaurants with 2.5-star ratings were 25 percent more likely to close. For restaurants with 4.5 and 5 stars, the risk increase dropped to 0.

One has to infer from a separate sentence in reporter Jonathan Kauffman's content — "According to data provided by Yelp, 8.7 percent of San Francisco restaurants that were open at the beginning of 2016 closed by the end of the year" — that the increased closure risk refers to the 12 months following a given minimum-wage hike.

Kauffman got a mixture of reactions from local restaurateurs to the study's results. None of them signaled absolute agreement with the Harvard study. But one must remember that this is the Bay Area, where expressing such an opinion might turn off liberal politics-obsessed customers or even turn their establishments into boycott targets.

Michael Luca said that he and Dara Lee Luca embarked on the study to find new ways of looking at the effects of rising minimum wage on employment, already the subject of hundreds of studies. Most rely on data from the Bureau of Labor Statistics, and their results have varied between the positive and the negative.

That statement about the results of minimum-wage studies is technically true, but ignores the fact that the overwhelming majority of such studies have found negative effects. As David Neumark wrote in the Wall Street Journal in late 2015:

Economists have written scores of papers on the topic dating back 100 years, and the vast majority of these studies point to job losses for the least-skilled. They are based on fundamental economic reasoning—that when you raise the price of something, in this case labor, less of it will be demanded, or in this case hired.

Indeed, minimum-wage laws will never repeal the economic law of supply and demand.

Kauffman's conclusion at the Chronicle comes off as callously indifferent, given that livelihoods are at stake:

What the study does prove is that in a highly competitive market like the Bay Area restaurant scene, the higher the cost of doing business, the more quickly restaurants are culled from the herd.

When restaurants are "culled from the herd" because of government-mandated cost increases like the minimum wage, people lose jobs they would not have lost if those cost increases had not been imposed. Additionally, restaurants which stay in business must engage in some combination of menu price increases and employment reductions to say afloat.

Recent government data from the Bay Area shows that something is happening in general retail and restaurant employment which is not taking place in California statewide: Year-over-year employment is dropping.

Here is the situation in retail (red boxes indicate year-over-year declines in not seasonally adjusted data):

To be fair, retail is being cannibalized by online purchasing. But statewide year-over-year retail employment in California is up, leaving open the question as to why it's down in the Bay Area.

The situation with restaurants is thus far mixed, but the following two tables, admittedly out of several which are flattening but not yet raising major alarms, demonstrate that all is not well:

The idea that the Bay Area's highly-trumpeted minimum-wage increases aren't relevant to the statistics just cited is absurd — as is the national establishment press's failure to recognize what is happening. It's a safe prediction that the effects will become more obvious in the coming months and years. Given California's size and the $15 minimum wage championed by Governor Jerry Brown which will go into effect statewide in several years, these counterproductive moves will likely end up adversely affecting nationwide employment statistics.

Bay Area restaurateurs and retailers — and, longer-term, California businesses in general — have a lot more to worry about than politically correct virtue-signaling.