Not News: SEIU on the Losing End of First-Ever Employer Defamation Verdict

"Firsts" — first man on the moon, first black president, first state to legalize something which was previously a crime, etc. — are supposed to be a big deal, right?

Tuesday evening, the Houston Chronicle reported a first in the entire history of organized labor in the U.S., and the national press is ignoring it. That's likely because it's really bad news for Big Labor. The result of a lawsuit filed by PJS Janitorial Services against the Service Employees International Union (SEIU) represents "the first time that a jury has found against a union in a business defamation or disparagement case."

Here are several paragraphs from the Chronicle's report (readers may have to put the headline or portions of its text into a search engine to fully access it; bolds are mine throughout this post):

A Harris County jury on Tuesday awarded a Houston commercial cleaning firm $5.3 million in damages, finding that a labor union's aggressive organizing campaign went too far when it maligned the reputation of the company. It opens the door for more employers to sue unions over hardball tactics often used in membership drives and contract disputes.

The jury, by a 10-2 vote, found for Professional Janitorial Service in a suit the company brought nine years ago against the Service Employees International Union, which targeted the company as part of its "Justice for Janitors" organizing campaign and wrongly claimed Professional Janitorial Service had violated wage, overtime and other labor laws. 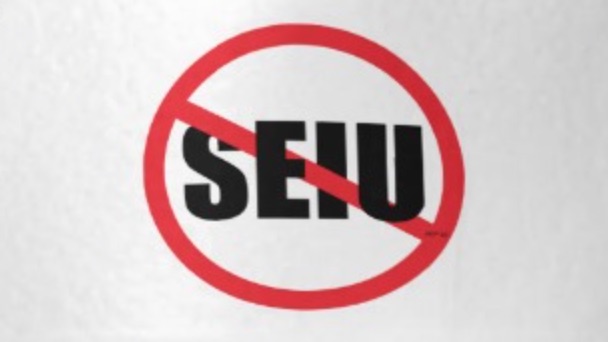 The case was the first time that a jury has found against a union in a business defamation or disparagement case, according to a search of legal records by the company's law firm, AZA of Houston.

"The jury found what PJS and its employees have known for more than a decade," Brent Southwell, the company's chief executive, said in a statement. "The SEIU is a corrupt organization that is rotten to its core."

Federal labor laws have historically given unions broad free speech rights, but the jury in state district court found that the SEIU recklessly disregarded the truth when it claimed that Professional Janitorial Service forced its employees to work off the books and fired some for their union activities. The Labor Department found no evidence of widespread wage violations and the National Labor Relations Board dismissed the unfair labor chargers, but the union continued to spread the allegations to clients of Professional Janitorial Service to hurt its business, according to evidence and testimony in the case.

... The trial, which lasted four weeks, represented the first time the SEIU, which has nearly 2 million members nationwide, has had to defend its tactics in front to a jury. Other cases, including a federal racketeering lawsuit filed by the international food, maintenance and cleaning company Sodexo in 2011, were settled before they ever got before a jury.

... The case stretches back more than a decade, when SEIU launched its "Justice for Janitors" campaign in Houston, organizing workers at the city's five biggest commercial cleaners and negotiating contracts with them. Professional Janitorial Service, the sixth largest, refused to recognize the union without first giving workers a chance to vote in a government-supervised election.

... Union officials celebrated each time a property management firm agreed to drop Professional Janitorial Service, according to emails presented during the case.

In other words, rather than take the opportunity to convince workers that organizing under their banner would be a good idea and then working to win an election, the SEIU resorted to scorched-earth tactics in hopes of either intimidating the company into folding or putting it out of business to teach other firms' managements a lesson. These are not the actions of a group which has workers' best interests at heart.

The SEIU must not have had a good feeling about this case for some time. Three years ago, it attempted to worm its way out of PJS Janitorial's legal action by claiming that it qualifies as (not kidding) a "media company," based on "articles and commentary published on the heavily trafficked website of Local 5 of the Service Employees International Union." An appeals court "rejected the union’s interpretation." At one point, SEIU "allegedly placed a giant inflatable rat in the building of a PJS customer, according to court records." Some "media company."

Investors Business Daily commented on the verdict in a Wednesday editorial (link is in original; readers should see it to get a flavor for just how employer-hostile SEIU really is):

As it has done countless times before, the SEIU targeted the company with a vicious, all out "corporate campaign," designed to ruin the company's reputation and starve it of business, until it submitted to the SEIU's demands. In this case, the union created fliers, emails, and op-eds to smear the company's reputation. It sent thousands of letters to the firm's customers claiming that PJS was engaged in disreputable labor tactics.

The SEIU's campaign to "kill PJS" was literally out of the manual. In this case, a document called "Contract Campaign Manual," which details strong-arm tactics the union encourages such as "jeopardizing relationships between the employer and lenders, investors, stockholders, customers, clients," threatening legal and regulatory action, and using the media to "damage an employer's public image."

This is a milestone victory that should embolden other companies to stand up for themselves, and discourage unions from making false and defamatory claims in the hopes that companies will simply cave.

Searches on a half-dozen relevant strings at the Associated Press's main national site, the wire service's "Big Story" site and at the New York Times returned no stories about the historic verdict (the searches linked are on "Houston jury," not in quotes). Gosh, I wonder if this lack of interest in reporting a "first" has anything to do with the fact that AP and Times reporters are themselves members of unions?

A Google News search on "Houston PJS Janitorial" (not in quotes, sorted by date, past 7 days) returned only five results. Other than the Chronicle and IBD items cited earlier, the remaining three results are center-right blog entries at Breitbart, Hot Air and the Weekly Standard.

I guess "firsts" are only newsworthy if and when they fit the leftist template.