On Tuesday, Harris County's prosecutor in Texas dropped the remaining criminal charges against David Daleiden and Sandra Merritt of the Center for Medical Progress. This ended a clearly politically motivated attempt to turn the tables on the pro-life heroes who showed that Planned Parenthood was trafficking in fetal body parts for compensation.

Predictably, the Associated Press did not handle the news well, essentially claiming that the CMP pair weren't prosecuted because of a "technicality," and continuing the myth propagated by Planned Parenthood by presenting as a supposedly indisputable fact that "The organization has said it never has and never would sell fetal tissue."

Here are several paragraphs from reporter Michael Graczyk's Tuesday evening report (bolds are mine throughout this post): 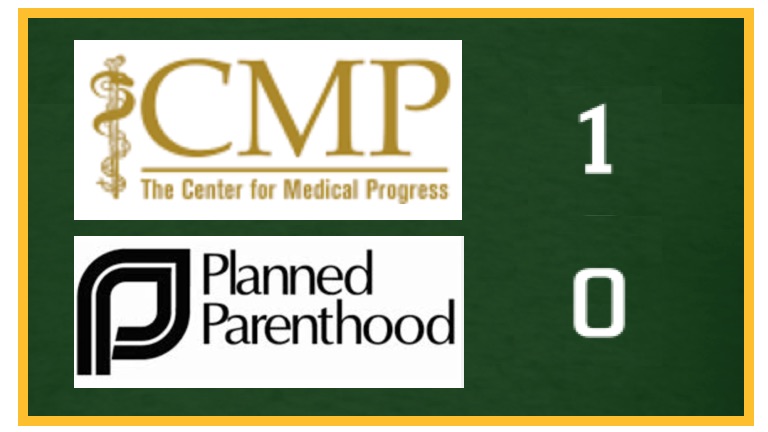 Texas prosecutors on Tuesday dropped the last remaining charges against two California anti-abortion activists who made undercover videos of themselves trying to buy fetal tissue from Planned Parenthood, agreeing with the defense's argument that the grand jury exceeded its authority by investigating the activists after clearing Planned Parenthood of wrongdoing.

District Judge Brock Thomas dismissed the tampering with government records charges against David Daleiden, 27, and Sandra Merritt, 63, at the request of the Harris County prosecutor's office.

"The grand jury took the investigation where the facts led it, however Texas law limits what can be investigated after a grand jury extension order is issued," District Attorney Devon Anderson said in a statement. "In light of this and after careful research and review, this office dismissed the indictments."

Anderson, a Republican who ran as a "proud, pro-life Texan mother of two" during the 2014 election, supported the charges when they were handed down in January, stressing at the time that at the outset of the investigation, she stated that "we must go where the evidence leads us." That didn't sit well with many members of her party.

Anderson's pro-life bonafides beyond personal bragging are quite questionable.

In May, "evidence ... emerged ... (that) the district attorney who indicted a pro-life journalist after he exposed Planned Parenthood's fetal body part business illegally colluded with the attorneys for the abortion provider":

Anderson was expressly forbidden by the Texas Attorney General's office to share raw footage of the videos with the abortion provider, yet, as Schaffer admitted under oath, he and an assistant DA Sunni Mitchell worked to get around the AG's order.

As the case against the CMP pair has collapsed, Anderson, as she effectively did in the statement the AP cited above, has spent almost all of this year "blaming the grand jury instead of taking responsibility for what her prosecutors presented as evidence to that grand jury."

Merritt wasn't at the hearing. Asked if the dismissal could be considered to be based on a technicality, her lawyer, Dan Cogdell, said it didn't matter.

"As long as my client gets a dismissal, I don't care what they call it," he said. "But she really was not guilty."

Planned Parenthood Gulf Coast, in a statement, said just because the charges were dropped, it doesn't mean the defendants were innocent.

Well, and just because the grand jury wouldn't charge Planned Parenthood doesn't mean they're objectively innocent, either. The AP's Graczyk wrote that "the grand jury cleared Planned Parenthood of misusing fetal tissue." That's wrong, Michael. Grand juries only decide whether or not to indict based on their evaluation of the evidence; they don't "clear" defendants.

Now let's get to Graczyk's fundamental claim about Planned Parenthood: "The organization has said it never has and never would sell fetal tissue."

... After the abortion is performed, the fetal tissue, the aborted child, is suctioned into a glass container. That glass container goes into a lab called the POC lab, the poc lab, that officially stands for ‘products of conception’, however in Planned Parenthood the joke was that it stood for ‘pieces of children’.

The tissue would be dumped into a glass baking dish, a little water would be squirted in there, and the POC technician who is not medically trained in any way would then begin pulling the parts of the baby away from each other and, depending on what was ordered by the company that we [PP] were going through — we personally went through Amphioxus Cell Technologies and Planned Parenthood Gulf Coast– and we would pick out depending on what was ordered, whether it was eyes, liver, the entire body, babies are always dismembered during abortion procedures, whether it’s through D&E or an aspiration procedure.

It is very rare to get intact tissue unless you are doing a procedure over sixteen weeks’ gestation. Many times they would also be ordering extremities — legs, arms, the calvarium, which is the skull, the head. We would piece these parts and then we would put them into a bio-hazard zip-lock bag. That would go into a Styrofoam container that had dry ice in it. That would go into our freezer that was already in the POC room. The freezer was jokingly called the nursery inside of our abortion facility, that was where all of the babies were held until a company…would come and either take them for bio-hazard waste [disposal] or we would ship them to the Amphioxus Cell Technology company.

Generally, in our studies that we did, we received $200 in compensation per baby that was sent. I can assure you that there is no additional charge for collection, or storage of fetal tissue. The only additional expense would be shipping and that’s between five to ten dollars per specimen, not $200. That [the $200] is sheer profit for Planned Parenthood.

And let’s just be a little generous here, the Planned Parenthood in Houston off of the Gulf Freeway, their abortion quota is to perform 75 abortions every day, 6 days per week. Let’s be conservative and say they only charged $100 per specimen, and let’s say that only 50 of the 75 women consented to harvesting this fetal tissue. That would be $100 per specimen, 50 specimens per day would be $5,000 per day, multiply that 6 days a week, we’re talking about $30,000 per week that Planned Parenthood was collecting from fetal tissue.

Planned Parenthood Gulf Coast can "say" whatever it wants. What it actually did while Abby Johnson was there proves that what it "has said" is false. The AP's Michael Graczyk is either breathtakingly ignorant, or knows better and chose to deliberately deceive his readers.

In October of last year, Planned Parenthood's national headquarters announced, as reported in the Associated Press, that "it will maintain programs at some of its clinics that make fetal tissue available for research, but will cover the costs itself rather than accepting any reimbursement."

Abby Johnson's testimony makes it crystal clear that the organization's Gulf Coast baby body parts business was receving far more than "reimbursement," while the undercover videos taken by the heroic pair from CMP make it equally clear that PP Gulf Coast was far from the only facility brokering baby body parts.