The Washington Post's Erik Wemple and certain "I walked through Bedford Stuy alone" reporters are contending that, in Wemple's words, "the term 'no-go zone' is best left in retirement." No sir, it needs to be defined appropriately, then used when appropriate.

Avoiding use of the term enables a dangerous detachment from reality. There is already quite a surplus of that. Patrick J. McDonnell at the Los Angeles Times, who seems to believe that he proved something by visiting the jihadi-infested neighborhood of Molenbeek and getting out alive, demonstrated how out of touch he is by referring on Monday — three days after the Paris terror attacks and at least two days after the parties involved and their backgrounds were firmly established — to "the so-called Belgian connection in the Paris attacks." Holy moly, Patrick. What about Molenbeek being "home to two" of the Paris attack terrorists who died during their attacks and to the plots' mastermind, Salah Abdeslam, do you not comprehend?

The "no-go zone" term has admittedly been employed inconsistently to describe a variety of urban neighborhood conditions, but that does not mean that its use isn't absolutely appropriate when certain conditions are present. 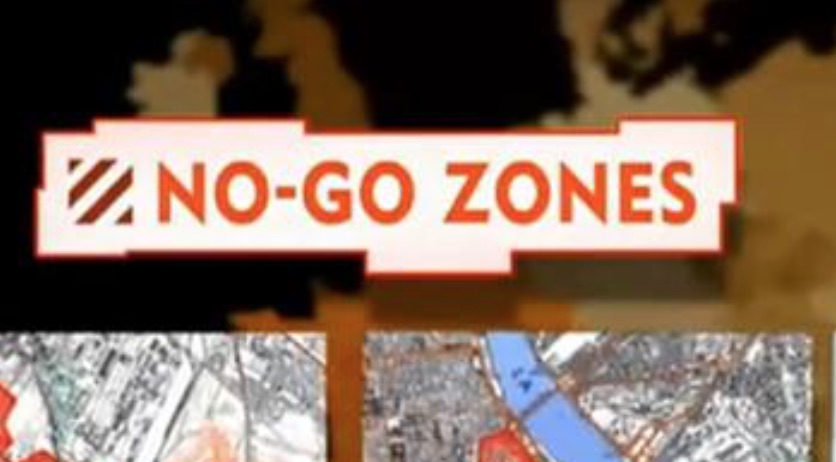 As a result, France is now rife with Zones Urbaines Sensibiles - "sensitive urban areas." The government officially lists some 751 of them: Islamic enclaves in the banlieues, often referred to as "no go zones" because the indigenous populations discourage the presence of non-Muslims who do not conform to Islamic standards of dress and social interaction, and of public officials - police, fire-fighters, emergency medical teams, and building inspectors - who are seen as symbols of the state's effort to exercise sovereignty in areas Muslims seek to possess adversely.

McCarthy's definition is one clearly in common shorthand use by European law enforcement. The law enforcement-driven/public safety use has been the primary focus of yours truly's discussion of the term since I first saw it employed a decade ago. Before political correctness overran common sense, the term appeared several times in the New York Times, and was used in 2002 by David Ignatius, now a colleague of Wemple's at the Post. Some of the no-go-zones have devolved into further detachment, turning into, as McCarthy describes it, "enclaves in which sharia gradually takes root as the de facto and, eventually, the de jure law." But that is not a precondition for a "no-go zone" in the law enforcement sense.

When Jan Jambon, the Belgian home affairs minister, as quoted by the Times, as cited by yours truly on Sunday, said that authorities do not "have control of the situation in Molenbeek,” he was right on the edge of describing a "no-go zone" in the law enforcement sense.

The Post's Wemple apparently wants his readers to believe that yours truly and the UK Independent rendered our own "no-go zone" judgments solely based on Jambon's statement. No we didn't. Wemple conveniently "forgot" that the Independent pointed to the specific employment of the term by a person who is clearly in a position to determine its appropriateness:

Brice De Ruyver, who spent eight years as security adviser to then-Prime Minister Guy Verhofstadt, said Molenbeek suffers from a cocktail of problems. “Youths are poorly educated, attracted by petty crime, have run-ins with police, and then there is a vicious circle, which leads to recruitment by radical groups,” he said, adding that the problems are now so serious, that it is hard to find police willing to bother tackling them.

“We don’t officially have no-go zones in Brussels, but in reality, there are, and they are in Molenbeek.”

How plain does someone have to make it before the PC censors say "No mas"?

In case Wemple and those who want to keep term "no-go zone" in retirement need more, here it is — from, of all places, Connecticut:

Stonington first selectman explains why Connecticut should be concerned about ISIS

Why should Connecticut be concerned about what played out in Paris on Friday evening? There are three good reasons, according to a former Connecticut congressman who worked for many years with the CIA.

... Simmons, a longtime Army Reserve military intelligence officer, has great regard for French intelligence agencies, but says they are handicapped because of a lack of border security.

... He adds that another invitation to terrorists in France comes in the form of some 800 no-go zones, which are places “French officials don't go because Sharia Law pertains.”

Former Congressman Simmons is former CIA. As a Congressman, "Simmons also served on the House Homeland Security Committee. While Chairman of the Subcommittee on Intelligence, Information Sharing, and Terrorism Risk Assessment." This former Congressman has stated, based on his extensive knowledge and experience, that there are 800 no-go zones in the far more restrictive "Sharia Law" sense in all of France. Aw, what the heck does he know? (That's sarcasm, Erik Wemple.)

The establishment press should not be reluctant, as they clearly are, to describe areas where everyday law enforcement and emergency personnel refuse to tread without extraordinary backup as "no-go zones" if those conditions exist. They can hold the term "Sharia-controlled enclaves" for the areas Simmons described, and not be afraid to use it when it applies.