As Spencer Raley at NewsBusters noted earlier this evening, StemExpress, "the now infamous biomedical company which allegedly bought fetal tissue from Planned Parenthood for profit, is breaking off its relationship with the nation’s leading abortion provider." Raley referenced a Politico item by Jennifer Haberkorn with a mid-afternoon Friday time stamp. As far as I can tell, it is the only establishment press outlet to note this development.

No establishment press outlet has noted a key courtroom development yesterday which may have been what really drove StemExpress to make its move — a move which, by the way, has not been announced in the "news" section at the company's web site, even though it has posted five other items during the past month relating to the Planned Parenthood fetal tissue outrages.

On Thursday, a judge in Los Angeles Superior Court told the company that a temporary restraining order it had obtained against the Center for Medical Progress, the producer of the undercover Planned Parenthood videos, is, as Ken White at center-right blog Popehat more fully described the matter, "unlikely to continue" (links are in original; bolds are mine throughout this post):

A couple of weeks ago ... I noted that a judge of the L.A. County Superior Court had issues a temporary restraining order preventing CMP from releasing a video of a meeting it had with StemExpress executives, and expressed some concern about the reasoning and how the ruling was constitutional under the prior restraint doctrine.  Eugene Volokh's take was clearer and less prone to outbursts of profanity. 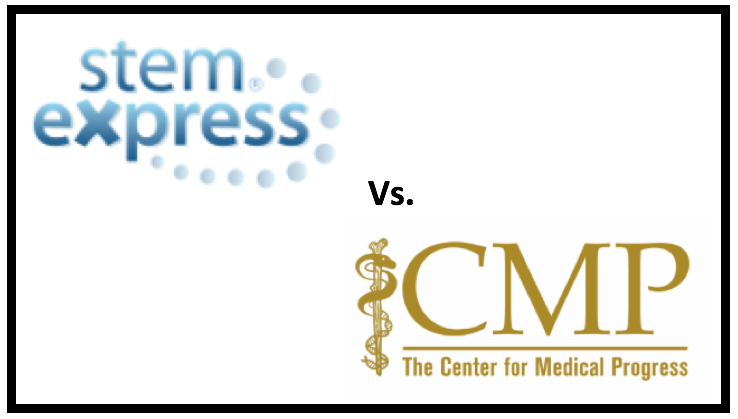 StemExpress' initial success now appears unlikely to continue. CMP has filed a well-drafted anti-SLAPP motion attacking the StemExpress complaint. I've explained how anti-SLAPP motions work before. If you're being sued for speech, and you believe the speech is protected, you can file the motion, lay the factual framework for the speech being protected, and force the plaintiff to come forward with admissible evidence showing it could plausibly succeed on its claims. Moreover, an anti-SLAPP motion halts discovery absent a special order of the court.

StemExpress had demanded early expedited discovery into the case; that request was thwarted by CMP's anti-SLAPP motion. So they appealed to the court under part of the anti-SLAPP statute for special discovery — an exception to the general rule that discovery is stayed when the motion is filed. They wanted, for instance, to gather evidence that would help them transform their brief temporary restraining order into a longer-lived preliminary injunction, which requires more proof.

The L.A. County Superior Court's decision does not bode well for their project. In what appears to be a tentative ruling, the court refuses their special discovery request, saying they have not shown adequate cause. More specifically, the court suggests there's no need for discovery in support of a preliminary injunction the court is not inclined to award.

... it appears that the court has been awakened to the prior restraint implications of prohibiting distribution of a video.

... (StemExpress will not) get an opportunity to see what exactly CMP has on them until everyone else gets a look at it, too, if this order holds up and the TRO is quashed. But if they are willing to cut ties with the single largest source of fetal tissue in the country by far, they must think this last video and the videos to come will be bad indeed — like, Category 5 bad.

All of this quite relevant information should have been known to Politico's Haberkorn when she wrote her item on StemExpress's move to sever ties with Planned Parenthood — or at least it would have been if the rest of the establishment press were doing its job. In this instance, as has so often been the case in stories involving the grisly side of the abortion industry, there is no establishment press story whatsoever on StemXpress's courtroom setback yesterday.

Searches at the Associated Press, the New York Times, the Washington Post, and the Los Angeles Times (in StemExpress's home state of California) at 11:30 p.m. Eastern Time returned no articles relating to either of the two developments described in this post. But all of them covered the company's initial restraining order successes. A Google News search on "StemExpress SLAPP" (not in quotes) returned only two relevant items: Morrissey's Hot Air post and a well-written writeup at Techdirt, whose Mike Masnick believes that "StemExpress's attempt to block the release of the video is almost certain to fail."

Concerning StemExpress's latest corporate move, it seems likely that the rest of the beat press will be content to say, as has frequently been the case with other stories, that, "Well, it's already at Politico, so we don't need to cover it." If so, that posture will probably keep the news from appearing on broadcast outlets other than Fox News this weekend. How convenient.