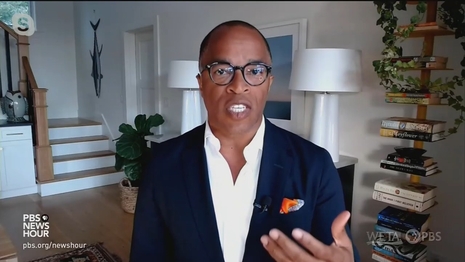 David Brooks said Liz Cheney was a “hero,” but "if the polls are any way remotely close to what reality is, she's about to get clobbered....in one of the polls, she was down by 22 percent." He added "when you read the Casper papers, one of the big beefs against her is not defense of Donald Trump, is that she isn't paying attention to us in Wyoming and she's gone Washington."

That’s where Capehart came in with his Jedi hero worship:

CAPEHART: She has made it clear that going after — speaking truth to power, not cowering in the face of Donald Trump, even putting her political career on the line, that that is what she's going to do, because she's decided that saving American democracy, standing up for the rule of law and the Constitution in the face of a grave threat is much more important than holding elective office in Wyoming.

And, look, I keep thinking about the scene in Star Wars: Episode IV, when Darth Vader and Obi-Wan Kenobi are battling it out on the Death Star. And Obi-Wan says to Darth Vader, if you strike me down, I will come back more powerful than you can imagine.

And, to me, Liz Cheney is Obi-Wan Kenobi. If she loses, which she very well might lose her primary on August 16, she could very well come back more powerful than Donald Trump has imagined. And if her goal is to ensure that he comes — never comes within any manner of feet of the Oval Office, if she can succeed in doing that, she will have done a major service to the American — to the American experiment.

JUDY WOODRUFF: We're going to have a quiz on Star Wars the next time we're together.

DAVID BROOKS: I know. I will do Marvel Comics.

WOODRUFF: All right, that was a great note to end on.

Earlier in the segment, both agreed Biden was piling up "impressive achievements" and both felt the Republican primary results showed (as Brooks said)  "the Republicans are doing a phenomenally excellent job of self-sabotaging."

PBS NewsHour is brought to you by...you, the American taxpayer, and also by Consumer Cellular.