Actor and director Rob Reiner spurred another hearty round of "Meathead" rebuttals on Twitter. But this time, it isn't one of his furious proclamations that Trumpers are a "cult." Instead, Reiner sounded like he was in a cult. He tweeted on Friday that President Biden's "record of accomplishments so far" is unmatched in modern history.

Screw politics. Screw poll numbers. Joe Biden has a record of accomplishments in the first two years of his Presidency that has gone unmatched for almost 60 years.

Reiner is probably referring to Lyndon Johnson passing a bunch of laws in the wake of the JFK assassination with large Democrat majorities in Congress. (We'll only briefly mention he passed the Civil Rights Act in 1964 with Republican votes.) Leftists with their blue-wave emojis loved it (more than 96,000 likes), and then lamely tried to argue that no one called Reiner "Meathead," only fictional Archie Bunker called him "Meathead." This was just as wrong as most Reiner tweets.

As our old colleague Michael Quinn Sullivan put it, "Someone is dropping acid again." 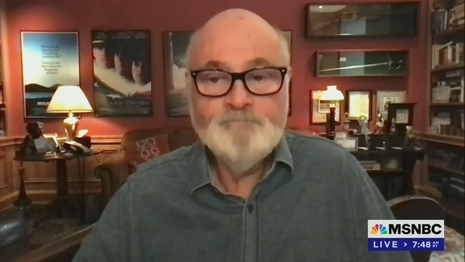 Former Trump aide Tim Murtaugh: "One of Rob Reiner’s greatest contributions, in my view, was the brilliant This Is Spinal Tap. Sadly, Nigel Tufnel had a better grip on reality than do Biden cheerleaders like Reiner."

Mike LaChance of the Legal Insurrection blog added: "There could be a mushroom cloud over an American city due directly to Biden's stupidity and Rob Reiner would still praise him and blame Trump. You can't debate someone like this, it's pointless."

This matches the tone of a Reiner tweet from last Sunday:

Donald Trump’s Cult followers believe he was sent by God to make America a White Christian nation. They are blind, filled with hate, racism and misogyny. They live in a 6,000 year old world where women and minorities have no rights. They can’t be reasoned with. Don’t try. VOTE!!!