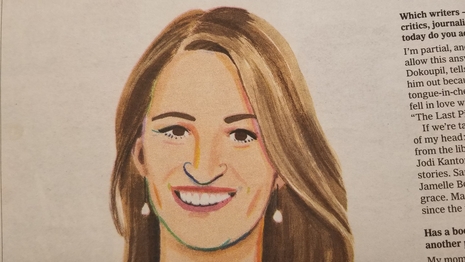 Back in 2015 when she was in charge of the women’s magazine Cosmopolitan, Joanna Coles admitted to Brian Stelter on CNN that she and her staff were guilty of “liberal cheerleading.” On Sunday, Coles was engaged in more liberal cheerleading in The New York Times Book Review – for MSNBC host Katy Tur and her second memoir Rough Draft.

Coles began:“It’s little wonder that Katy Tur is one of America’s top TV journalists, given that her parents were obsessive reporters.” Later came greater gush:

And despite a second memoir just shy of 40, she seems low-maintenance for a TV anchor. With her sharp eye and intelligence, she seems wasted behind that damned desk. Her Trump coverage was eerily prescient, but because the political pundits at NBC didn’t take Trump seriously, they forced Tur to second-guess herself. Schooled as a toddler from the helicopter, she’s exactly the reporter you want out in the field doing special reports, not seated behind a desk at 2 p.m.

The publisher touted Coles saying "It's a hell of a story."

Coles touted Tur's first memoir Unbelievable as "a riveting account of her own obsessive chase of Donald J. Trump on the campaign trail, and it remains one of the best accounts of the 2016 election." (It was a typically "candid" attack on Trump. The Times provided sales lingo for that one, too.)

“I almost felt like there was a strange connection between yourself and Donald Trump,” Trevor Noah observed when Tur went on his Daily Show to promote the book. “Did you feel it?”

“Yeah, I felt it,” she writes in “Rough Draft,” her second, equally compelling memoir, in which her father replaces Trump as the central theme, “but I dodged the question because the answer would have only raised more questions.”

Now she's fully embracing this self-promotional theme that she knew Trump better than the other reporters because he was like her "narcissistic, grandiose" father whom she claims physically abused her. Coles replays her spin: “My father is not Donald Trump and Donald Trump is not my father. But if anyone asked me, I’d recommend the same therapist.”

A month ago, the Times Book Review promoted Tur's second book by granting her a "By The Book" interview, complete with a less-than-flattering portrait. That also seemed designed to boost the MSNBC host's fame and fortune.