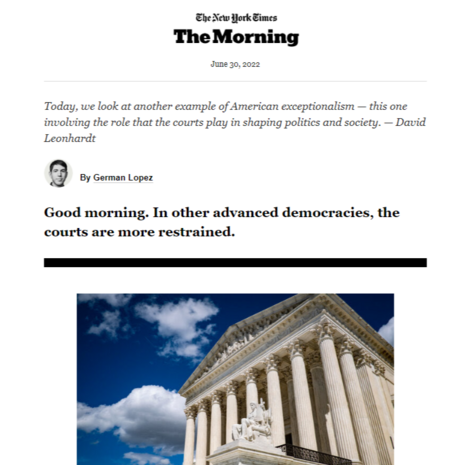 When the Supreme Court ruled 7 to 2 in Roe vs. Wade and liberals were dominant, the "objective" media loved the court and its "landmark" rulings. Now that the court is tilting to the right, it's a danger to democracy as we've known it. On Thursday, the daily New York Times newsletter "The Morning" was alarmed: "In other advanced democracies, the courts are more restrained."

Ours is a "global outlier," wrote German Lopez (who came over from liberal Vox.com):

But the Supreme Court’s power is strange in a global context. The highest-level courts in other rich democracies tend to be less dominant. Elsewhere, courts can still overturn laws and restrict the government’s reach, but they often face sharper limits on their decisions.

...The U.S. model means the current court’s makeup of six conservatives and three liberals is likely to remain in place for years if not decades. And if justices are careful about timing their retirements to benefit their ideological side, it could last even longer. As a result, future elections and public opinion can end up having little influence on the court.

In other countries, limited terms and mandatory retirement ages create opportunities for more recently elected lawmakers to remake the highest courts and keep them in check.

Suddenly, the NYT is concerned about a too-powerful Supreme Court, and unchecked judiciary.   For my entire life, SCOTUS has been upending the values and traditions of America:  prayer in schools, and all religious expression or connections to public life, the structure of state legislatures through byzantine and unintelligible and conflicting redistricting decisions, busing (destroying the urban schools), vetoing term limits for Congress, despite having been approved by more than 20 million Americans, abortion, same-sex marriage, New York Times v Sullivan, that has resulted in the most irresponsible and dishonest media imaginable and on and on.

The Warren Court and its progeny essentially created the blueprint for today’s tortured society.  And only when SCOTUS starts to right that ship do the NYT / leftist elites start to question the power the Court grabbed for itself for the past sixty years.  The article below could have been written by any right-thinking American any time until now.

This is not the first time that German Lopez has been the poster boy for shifting opinions on law and order. In 2016, Curtis Houck noted Lopez penned a Vox article titled “Riots are destructive, dangerous, and scary — but can lead to serious social reforms." Last year, P. J. Gladnick noted a major flip after January 6: "Every person who forced their way into the Capitol should be arrested."