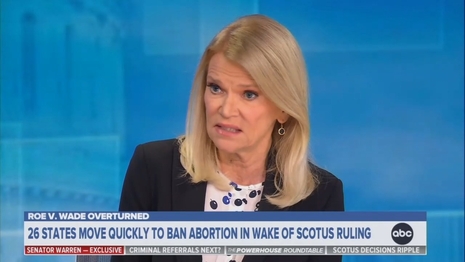 It was a weekend of wailing and teeth-gnashing over the Supreme Court overturning Roe vs. Wade on Friday. One anchor even embarrassed herself by lamenting that Gov. Kristi Noem and millions of other people believe an abortion ban saves babies.

That was ABC This Week host Martha Raddatz, who opened her softball interview with Elizabeth Warren by asking about Noem and the other apparent oddballs who work to save the unborn: "Is that a position you can respect in any way?" Noem faced hardballs, and Warren was simply asked to denounce Noem.

CNN's atheist agitator S.E. Cupp was so upset that when asked how this would play politically, she bizarrely claimed "It's hard to imagine the Republican Party surviving this. Between anti-abortion, anti-LGBTQ, book banning, anti-democracy -- add all of the regressive bulls--t...and add it all together, and I don't know who's left in future generations."

Then we explain how "independent fact-checkers" rushed to defend President Biden's angry remarks after the Supreme Court decision when he said America was now a global "outlier" on abortion. Wrong. We were a global outlier before the court put any limits on abortion.