As part of a media tour selling her new personal memoir Rough Draft (after her Trump-campaign memoir a few years ago), MSNBC host Katy Tur appeared on Monday's Fresh Air for the hour on NPR. Tur talked about growing up with an abusive journalist father, Bob Tur, who now identifies as Zoey Tur. She compared him to Donald Trump as bombastic and volatile and scary, and suggested they could see the same therapist. 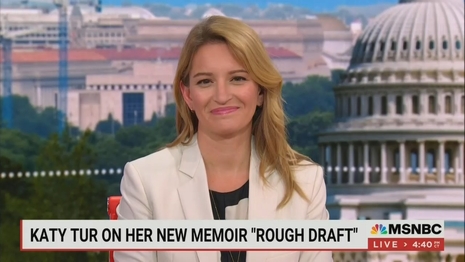 DAVE DAVIES: It's interesting that when I read in your new book about your relationship with your father, I wondered if in some way dealing with that experience helped prepare you for dealing with Donald Trump.

KATY TUR: It definitely did. And, you know, my dad and Donald Trump have similar personality types. I'm not saying that they are the same person. I'm not saying that they have the same thoughts or advocate for the same things, not at all. But personality types - and this is bombastic and magnetic and funny and volatile and sometimes scary and angry, all of that rolled into one.

Before she broke out at NBC, Tur dated Keith Olbermann when he was an MSNBC star. Davies said he didn't know about it.

TUR: I'm actually happy to hear that you didn't even know that. That means there's been some distance. But when I first started out, I was a lot younger than Keith. And Keith was an enemy of the New York Post and Fox News. And so they would try to dig up anything they could about him to discredit him or to hurt him. And at the time, I was a pretty easy target. And so they dug up stuff about me. And they found, you know, a photo of me dancing in college and put it out there...And the subtext was that I'm a bimbo...

And that label followed me around for a while, this bimbo label and the whispers of, oh, she only has this job because of this reason or that reason. Keith got her this, and that's why she's here, that's why she knows people - never, wait; hold on. Like, she's doing the work, and (laughter) she's doing a decent job at the work. It took many years for me to shake that off. And even today, when you want to discredit me, you will bring up Keith. Like, my Twitter is filled with people saying that I slept my way to the top, etc.

She joked it's not as if Olbermann left networks like MSNBC "amicably."

At the end, Tur lamented that people are too partisan in their news tastes. "And obviously, some corners are worse than others. And I think that we do great, impartial journalism in the daytime hours of my network. But I also worry that viewers can be primed to expect something."

NPR is paid for by....you. You can share your opinion on this by contacting NPR Public Editor Kelly McBride here.

PS: On Wednesday there was this:

Nicolle Wallace praises Katy Tur for her new memoir (Wed.): "So we work in this world where our beloved viewers are the exception. There's a lot of nastiness that gets directed at us..."

And you don't dish out the nastiness? Your viewers don't? pic.twitter.com/RQBYlBgrup