NewsBusters Podcast: Brian Stelter Is Not the Dictator of News Content 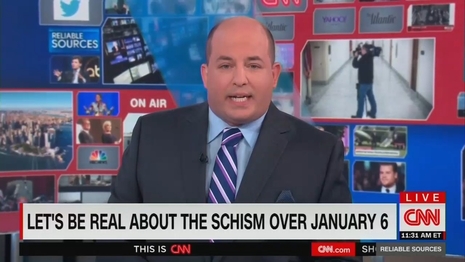 Brian Stelter is upset that Fox and Newsmax will not commit to airing hours of live prime-time propaganda from the liberal-stacked House January 6 committee. You're not a "news channel" unless you follow Stelter's orders. It's a "broken information environment" if he's not obeyed. Stelter even characterized the conservative channels as a "schism" from news orthodoxy.

Forcing someone to cover something doesn’t sound very small-d democratic. But it makes sense IF you believe you are the judge and jury of what represents democracy. Conservatives are somehow anti-democracy, so they can't serve on the 1/6 committee, and if they describe the committee as "illegitimate," it just proves they are ruthlessly breaking the media.

Should we make a list of all the hearings CNN has skipped?  Or should we show Brian where CNN ducks out of hearings (for analysis or advertising) when the Republicans get their turn to ask questions? Last October, Stelter's colleague Oliver Darcy played this game. One day, he complained Fox didn't cover the 1/6 committee going after Steve Bannon. Two days later, Darcy complained Fox was giving too much coverage to a hearing where Republicans threw hardballs at Attorney General Merrick Garland.

Enjoy the podcast below or wherever you enjoy podcasts.