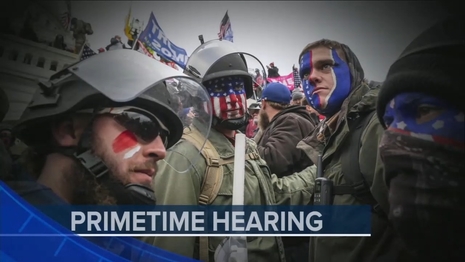 ABC and CBS have already announced they will interrupt summer reruns for live coverage of the Democrat-loaded House January 6 panel. But is it a "hearing"?

Mike Allen of Axios reports the committee "has turned to a renowned former network news executive to hone a mountain of explosive material into a captivating multimedia presentation for a prime-time hearing Thursday."

James Goldston — former president of ABC News, and allegedly a "master documentary storyteller" who ran Good Morning America and Nightline — has joined the committee as an unannounced adviser. Goldston grew up in England and went to Oxford before joining ABC alongside Martin Bashir in 2004. He just left ABC in March of 2021.

Allen wrote "I'm told Goldston is busily producing Thursday's 8 p.m. ET hearing as if it were a blockbuster investigative special." The Democrats want to grab eyeballs as part of their effort to salvage the midterms by posing as the Saviors of Democracy.

Now imagine if the Republicans stacked an investigative committee and then hired a Fox News president as an "unannounced adviser" for prime-time hearings. The liberal outlets would all scream that there's no difference whatsoever between the GOP and Fox. So, in this case, there's no difference whatsoever between Pelosi's hand-picked committee and ABC, and CBS, and CNN, and so on. ABC News apparently has no concern that Goldston's advising will hurt the image of ABC News.

CNN's report explained "The committee has hopes of putting on hearings that don’t look like traditional congressional proceedings, and instead are multi-media presentations that weave a narrative outlining the committee’s findings. Their goal is to demonstrate how former President Donald Trump and his allies peddled a false narrative about the election that laid the groundwork for the riot at the Capitol on January 6, 2021."

In other words, this is a long political commercial that the networks are going to air at no cost to the Democrats. If the shoe were on the other foot, the networks would all boycott it because it's not a live news event, it's a "blockbuster multi-media event weaving a narrative" for one party.

Allen added this preview of the advertising/hearing:

-- The hearing will be a mix of live witnesses and pre-produced video.

-- I'm told the committee has gained access to official White House photographs from Jan. 6, 2021, that have never been seen publicly.

-- Only a fraction of the surveillance footage from inside the Capitol — all kinds of angles were captured — has been shown.

-- Many of the committee's depositions were videotaped. We'll see clips.

To get a sense of how Goldston and the Democrats have a mutual loathing, Goldston's production company is presently working on a docu-series called Kushner Inc. based on the gossipy liberal book by Vicky Ward.