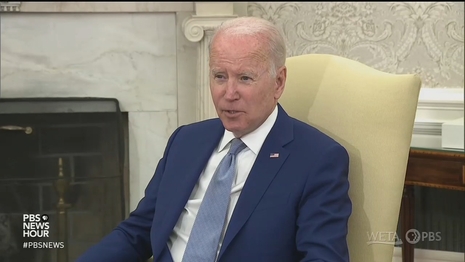 As we march into June, the midterm prospects for the Democrats look very bleak. President Biden’s approval ratings are often under 40 percent, below Donald Trump’s numbers at this point, when the TV soothsayers were always predicting “the walls were closing in” on Trump. His presidency would surely self-destruct in five seconds.

It’s rough enough for Biden that NBC News ran an online article by four reporters who gained anonymous access to “more than two dozen current and former administration officials, lawmakers, congressional aides and other Democrats close to the White House.”

The headline was “Inside a Biden White House adrift: Amid a rolling series of calamities and sinking approval ratings, the president’s feeling lately is that he just can’t catch a break — and that angst is rippling through his party.”

You can tell the journalists are Democrats when Biden is never considered responsible in any way for any “calamities.” No, just like the press under Jimmy Carter, NBC says crises piled up that “made the Biden White House look flat-footed: record inflation, high gas prices, a rise in Covid numbers.”

They found author Chris Whipple to speak on the record about the “epic challenges,” lamenting the poor Bidenites “came in with the most daunting set of challenges arguably since Franklin D. Roosevelt, only to then be hit by a perfect storm of crises, from Ukraine to inflation to the supply chain to baby formula....What’s next? Locusts?”

When Republicans are in the White House, nearly every problem in America is blamed on Republican rule. Under Democrats, it’s just a “perfect storm” of mysterious failures.

The funniest line in this narrative was Biden “venting to aides about not getting enough credit from Americans or the news media for actions he believes have helped the country, particularly on the economy.” Biden’s blaming the news media! Somehow, they aren’t dedicated and dutiful servants for the Democrats.

They really can’t complain about NBC when they’ve picked up both Biden press secretary Jen Psaki and Harris spokesperson Symone Sanders to repeat Democrat talking points on “news” programs on MSNBC and Peacock.

It’s also amusing that Biden grumbled about being corrected when he steps in rhetorical doo-doo. “He makes a clear and succinct statement — only to have aides rush to explain that he actually meant something else,” reported NBC. “The so-called clean-up campaign, he has told advisers, undermines him and smothers the authenticity that fueled his rise.

Don’t “smother the authenticity” when Biden says something that sets the globe on edge. The NBC example here was Biden said in Poland that Vladimir Putin “cannot remain in power.” He didn’t want anyone “walking that back.” Or when he said America would go to war to China to defend Taiwan. He’s “authentically” reckless.

Biden thinks his staff shouldn’t correct him, because it gives Republicans a talking point. Wrong. That talking point is already there, whether they correct it or not. He sounds like a blabbering boob. Democrats all thought Trump was the loose-lipped generalissimo who would tweet us into global war, so what is this?

NBC found surprising “managerial breakdowns,” upending “an assumption baked into Biden’s candidacy... that he would preside over a smoothly running administration by dint of his decades of experience in public office.”

That “baked assumption” of Biden’s smooth competence has collapsed under the weight of reality. The assumption was always false, but the media sold it aggressively. Now Biden pressures them to engage in ridiculous happy talk about his accomplishments. He’s more likely to succeed in manipulating journalists than he’s succeeded in manipulating the economy.