Liberals Hail Psaki as 'One of the Best Press Secretaries Ever'

The liberal-media tributes are already pouring in for departing White House press secretary Jen Psaki. At Poynter.org -- parent organization of PolitiFact -- Tom Jones gushed over her legacy as "One of the best press secretaries ever." Brian Stelter touted the article in his Reliable Sources newsletter: 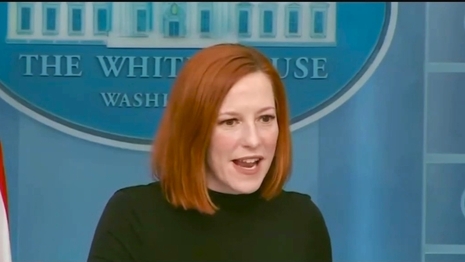 Of course, Trump's spokespeople were doing what he wanted. And Psaki was doing what Biden wanted -- restoring a pre-Trump sense of normal.

The "sense of normal" isn't just the end of Trump, but the restoration of the Democrats.

Naturally, Poynter was quickly picked up by the White House press shop!

"Psaki was consistently prepared, effective in communicating for the president and, even when sparring with media members, always respectful." https://t.co/0ZmP7e2Epp

Stelter didn't quote Jones going off on Kayleigh McEnany: "Psaki was certainly a welcome change from her immediate predecessor, Kayleigh McEnany, who goes down as one of the most incompetent press secretaries ever. (McEnany’s daily pokes at Democrats and the media now fit right in at Fox News.)"

This is a revealing quote from Jones: "competence" and "pokes at Democrats and the media" are apparently opposites. Liberals want a press secretary who treats liberal reporters as the wisest people imaginable as they suggested Trump was responsible for every coronavirus death: "If an American president loses more Americans over the course of six weeks than died in the entirety of the Vietnam war, does he deserve to be re-elected?"

Jones also noted Stephanie Grisham wrote in her anti-Trump tell-all book that she never held an official press conference because “I knew that sooner or later the president would want me to tell the public something that was not true or that would make me sound like a lunatic.” This is a strange sentiment since Grisham, made regular appearances on conservative cable-news networks to tout Trump.

Stelter and Jones never acknowledge that press briefings for a Democrat press secretary are usually quite placid, a meeting among friends. Republican press secretaries, on the other hand, face a barrage of hardball questions. Under Trump, that multiplied into a brazen hostility, an outrage at the notion that Trump hadn't been removed yet.

In about 16 months working on behalf of President Biden, Psaki held a greater number of briefings, 224, than all of President Trump's press secretaries combined. The Trump-era total was 205, according to Martha Joynt Kumar, director of the White House Transition Project. Kumar counted 58 briefings by Sean Spicer, 107 by Sarah Sanders, zero by Stephanie Grisham, and 40 by Kayleigh McEnany during a four-year period...

Conservatives (some of whom watched Psaki's briefings live on Fox) criticized Psaki for dodging questions. Liberals celebrated her for neutralizing loaded questions (including some asked by Fox) and defending Biden's agenda. WH reporters appreciated her accessibility, though it didn't make up for Biden's relative lack of press conferences and interviews.

Stelter and Co. should acknowledge that Psaki's regular press briefings were a strategy for defusing any protests that they were hiding Biden from press conferences and interviews. As the Republican National Committee often tweets, Biden hasn't granted an interview since February 10, more than three months ago.