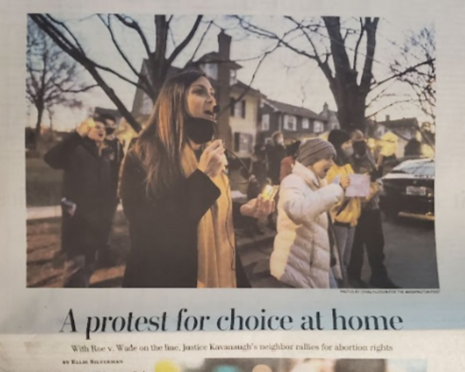 The Washington Post has a bad habit of applauding rudeness – when it’s “progressive.” We remember the hosannas for Juli “Middle Finger Salute” Briskman, elected to the Loudoun County Board.

Now Ellie Silverman, a reporter covering “protest movements,” penned a salute to Lacie Wooten-Holway, a neighbor of Justice Brett Kavanaugh who organized pro-abortion protests in front of his house.

The headline with two large color photos on the front page of the Metro section was “A protest for choice at home: With Roe v. Wade on the line, Justice Kavanaugh’s neighbor rallies for abortion rights.”

There’s no one quoted in the story that actually opposes abortion, or supports Justice Kavanaugh. There’s just nervous neighbors who aren’t sure about the tactics. The strongest objection was “This constant escalation, I think, makes it dangerous.” But there was space for rebuttal:

“That I don’t agree with,” the man interjected. “I think you vote, and you expand the court. You don’t go to a guy’s house.”

She had heard the argument before and responded: “I organize peaceful candlelit vigils in front of his house. …We’re about to get doomsday, so I’m not going to be civil to that man at all.”

They loved that quote, pulled it out for emphasis. It’s also ridiculous. It’s like a mushroom cloud that you can’t get an abortion whenever you want. There was one troubled neighbor who didn't want to explain the baby-dismantling to her seven-year-old. But it was mostly promotional.

We're told Lacie had two abortions -- at 18 and 21 -- before having two children. It continued:

For months, Wooten-Holway, a 39-year-old teaching assistant and aftercare staffer, mother of two and the youngest of five sisters, has taken the unusual step of protesting a neighbor.

Usually she is the only neighbor there — a reminder that with every march and chant she is breaking an unspoken contract of civility.

In Chevy Chase, just beyond the District line, geniality among neighbors has long been part of the social code. But Wooten-Holway — who has had an abortion and is a survivor of sexual assault — cannot separate the politics from the personal...

As hundreds of women mobilized in the nation’s capital to protest Kavanaugh’s nomination to the court, Wooten-Holway marched with them.

Footage of Wooten-Holway in the crowd of people protesting appeared on CNN that day, her hands above her head holding a graphic sign of a caricature of Kavanaugh groping Lady Justice, one hand over her mouth, saying “Don’t Scream!”

Wooten-Holway’s activism drew attention to herself and her eldest, Patience, who was 12 years old at the time and uses they/them pronouns.

You can still cartoon Kavanaugh as a groper, and no one fears Glenn Kessler will break in for a fact check.

“If the conservative justices are considering rolling back a precedent that protects what people choose to do with their own bodies, she says, then no home address is out of bounds.” https://t.co/0mJAdTIP2t

Silverman heavily tweeted and retweeted her story, but wasn't wild about tweeting her stories in March on the trucker convoy that traveled to DC opposing vaccine mandates. Who's the hero this time? And who's toxic? It's not a surprise.

“If you drive through our neighborhoods in your 10 ton diesel with your air horn blaring, and your toxic message — expect to meet peaceful resistance,” says Daniel Adler, the 49-year old bike man.

Read more about his spontaneous protesthttps://t.co/iSvieo3HGw

You can tell from Silverman's Twitter page that she is woke...especially inside the newsroom and its labor practices: 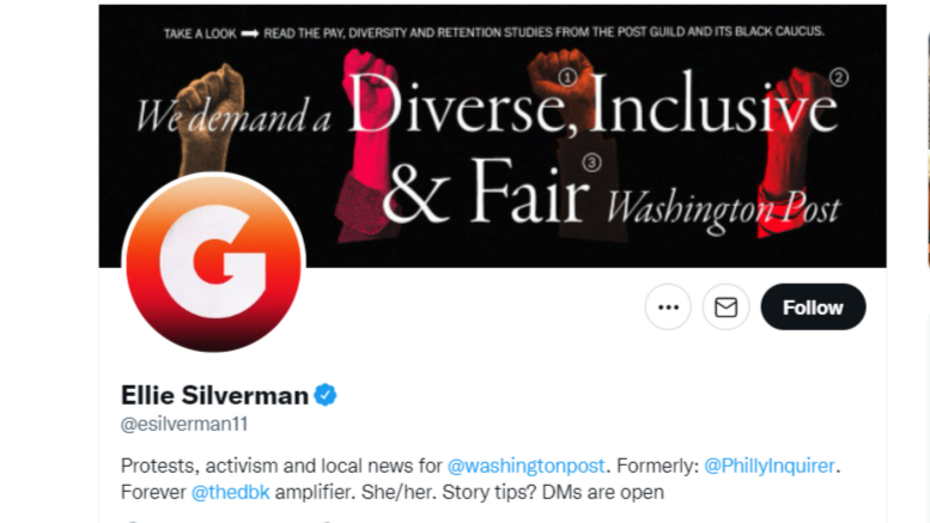