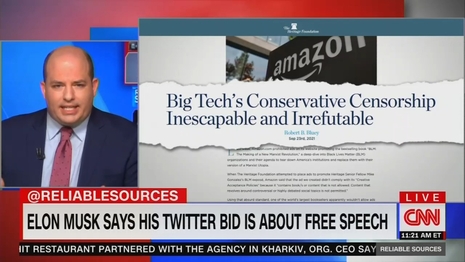 STELTER: Is Twitter biased against conservatives? That's the title of this new working paper by professors at MIT and Yale.

Stop right there. Are you laughing yet, that Yale and MIT professors are going to tackle a liberal bias?

STELTER: In the words of Professor David Rand, the root of the challenge when looking at this is that Republicans, conservatives, are substantially more likely to share misinformation or fake news than Democrats are. Thus, as social media's platforms, the policies aimed at reducing nonsense and boosting real news would ensnare Republican users more often.

This research team found wide bipartisan support for platforms trying to reduce misinformation. People don't want QAnon craziness all up in their news feeds, but Professor Rand says putting these two observations together shows the problem. In responding to bipartisan demand, platforms may wind up enforcing on conservatives more than on liberals.

There is not “bipartisan demand” to squash news stories Democrats don't like. There is bipartisan agreement on the question of should Big Tech moderate content. If Stelter weren’t tilting this discussion, he wouldn’t (silently) equate stories like the Hunter laptop with “QAnon craziness.”

Stelter then raised the idea that complaints of conservative censorship are "core to the GOP's identity." He doesn't seem to realize conservatives would rather NOT have this "identity." Would he suggest Black Lives Matter has a complaint "narrative" that's core to their identity?

Stelter put on screen an image of a Rob Bluey article titled "Big Tech's Conservative Censorship Inescapable and Irrefutable." It's escapable when CNN runs away from it.

STELTER: Now, complaints about conservatives being censored online, they are core to the GOP's identity. See this Heritage headline as an example, it plays into the cancel culture narrative that powers Trumpian fundraising efforts, and now it is at the heart of Elon Musk's hostile takeover bid for Twitter.

If there is Misinformation being circulated by CNN, it starts with the notion that they and their liberal media brethren are "mainstream."

Stelter didn't bring on Bluey or any conservative to debate. He brought on his CNN colleague Clare Duffy and Jessica Toonkel of the website The Information. He asked Toonkel "When you're suspended or banned by a social network that is a very intense thing and not to be taken lightly but this cry that it's all about Republicans being censored, do you buy into that?"

She didn't even answer directly: "I think that his push about free speech and that he's going to like open it up to everyone, I mean, despite all the rhetoric, like he can't do that.That's not realistic."

Stelter played along: "Most users don't want to live in a sewer on their phones full of bull -- you know, they don't want that. They actually want some moderation."

This reliably liberal segment was brought to you in part by LifeLock.