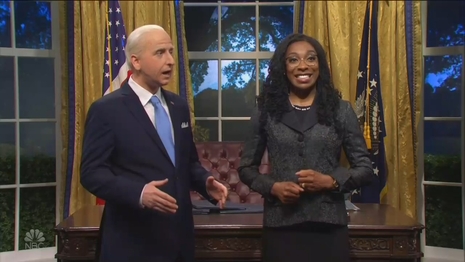 NBC's Saturday Night Live aired several jokes in their most recent episode scouring Senate Republicans Ted Cruz and Tom Cotton, and nobody expects the "independent fact-checkers" will find "missing context" in the humor. They have punished right-leaning satirists at The Babylon Bee, but liberals get a pass as they pretend Ted Cruz called Ketanji Brown Jackson a pedophile for a week, and Tom Cotton cheered the idea of lawyering for the Nazis. If humor shouldn't be fact-checked, that should apply to both sides.

Other topics on this episode include:

-- The New York Times Book Review felt the pain of "people with vaginas."

-- CNN pretended Barack Obama has always been the victim of misinformation, and never its purveyor.

-- Jake Tapper tossed rose-petal questions at Liz Cheney, who may be his favorite Republican. (Kinzinger is surely in the running.)

-- Brian Stelter hilariously avoided any mention of the hardball questions he and Anne Applebaum received from college freshmen over their Hunter Biden coverage in 2020, even though Stelter had Applebaum on as a guest on his Sunday show.