CBS News had serious internal "turmoil" on its hands when they hired former Trump Chief of Staff Mick Mulvaney as an analyst, since he is outside their ideological bubble. But CNN's Oliver Darcy reports there was also unhappiness at NBC News when reports emerged that they hired Biden press secretary Jen Psaki as a TV host for their Peacock streaming service (at least for now). She might "graduate" like George Stephanopoulos to the "news" flagship. 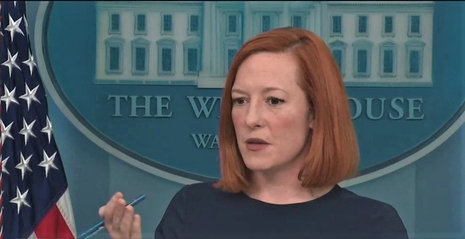 Oppenheim, who does not oversee MSNBC, told the journalists that NBC News did not have a role in hiring Psaki. And he noted to those on the phone that they work for the NBC News brand and that the hires made for MSNBC’s opinion arm should be viewed as unrelated to their work, the people said.

“People wanted answers on what NBC’s role was in this and NBC News had no role in this,” the person added. “This is MSNBC’s perspective programming.”

Please don't laugh about NBC News being journalistically distanced by at least six feet from "perspective programming." For most viewers, NBC and MSNBC easily blur together, sharing their on-air "talent" and resources.

As with the Washington Post reporting on CBS, CNN's Darcy relied on sources that were comfortably anonymous:

Oppenheim’s call, however, hasn’t fully stamped out the frustration among NBC News journalists, the people who spoke to CNN said....

The drama around Psaki’s hiring has exposed a larger issue at play in the NBC Universal News Group: a rift between NBC News and MSNBC that is once again growing.

In fact, Psaki’s hiring wasn’t the first move that has irked some journalists at NBC News. “This has been a slow boil for a while,” one NBC News staffer said.

Some NBC News journalists were first bothered when MSNBC announced that it had hired Symone Sanders, the former senior spokesperson for Vice President Kamala Harris, to host a show on the weekends, people familiar with the matter said.

Hours after that meeting, NBC's Kristen Welker attempted to display the staff displeasure by asking Psaki about the conflict of roles at the White House briefing (without noting it was HER network).

The bright side for Psaki is that it's highly unlikely Jimmy Fallon will do a routine comparing her to a Nazi goon in an Indiana Jones movie. In fact, Seth Meyers brought up the new gig only to make fun of the president:

Seth Meyers on Biden press secretary Jen Psaki getting hired by MSNBC to stream on Peacock:

Oh God! Can I please be there when you teach Joe how to download Peacock?

"I need a Roku? Isn't that one of those Japanese poems? " pic.twitter.com/zW5cm2Ba5k