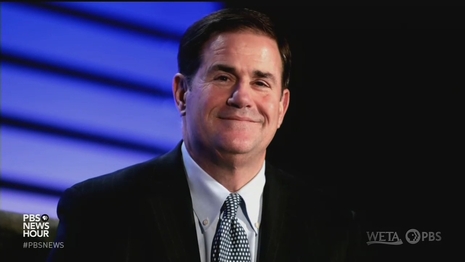 The Associated Press reporter in Phoenix and other Arizona reporters want to put Gov. Doug Ducey on the defensive. AP's Bob Christie positioned Ducey exactly where the Left wanted him on his bill on preventing men from women's sports. The headline was "Arizona governor won’t say transgender people exist."

Nobody said transgender activists were like Santa Claus or the tooth fairy. But on the left, unless you respect transgenders and accept their gender-bending, you don't "see" them, you "erase" them, like they don't exist. The AP story began:

The Republican worked instead to defend his signatures on bills that bar transgender girls and women from playing on girls high school and women’s college sports teams and barring gender affirming surgery for anyone under age 18.

When specifically asked if he believed that there “are really transgender people,” the governor paused for several seconds before answering.

Asked again if he believed there are “actual transgender people,” he again answered slowly and carefully.

This is somehow a gaffe. President Biden can say transgenders are "made in the image of God," and nobody shouts at him about how transgender people don't accept what God "assigned" them. Instead, AP lines up the Ducey haters:

Ducey’s response was “appalling,” according to the Arizona director of the Human Rights Campaign, a national civil rights group that advocates for equality for LGBTQ people. The organization worked to ensure families and transgender young people came to the Capitol to testify against the bills as the Republican-led House and Senate considered them this session.

“It’s quite shocking that he can’t even address trans people or even say that he thinks they exist,” Bridget Sharpe said.

In response to the badgering, Ducey tweeted the questions were "absurd and offensive."

The media is once again attempting to divide people. Yesterday I was asked an absurd and offensive question: Do transgender individuals exists? Of course they do. Read the signing letter I issued the day before this question was asked: https://t.co/62MiTGO57i pic.twitter.com/GScCBjvpDr